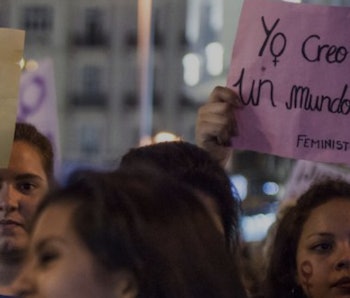 To mark International Women’s Day, over 5.3 million women in Spain took part in a general “feminist strike,” according to the Workers’ Commissions and the Workers’ General Union.

The 24 hour strike is unprecedented in the country, and involved asking women to stop work — including domestic chores — and spend no money for the entirety of the day. Demonstrations were planned across Spain, with thousands marching in Barcelona, Madrid and Bilbao.

In Barcelona, police appeared to be aggressively attempting to disperse passionate demonstrators who had gathered to protest. One of Spain’s largest newspapers, El Pais, reported that demonstrators had brought traffic to a stand-still due to blocking off central thoroughfares.

The strike was organized by a coalition called the 8 March Commission as a means to show the frustration of Spanish citizens at the country’s wage disparity and a culture that still allows for violence to disproportionately effect women.

“We do not accept being subjected to worse working conditions, nor charging less than men for the same work. That’s why today we also do a labor strike,” the Commission’s manifesto reads.

Gender pay gaps are pretty much ubiquitous across the European Union, and in Spain it the gap stands at around 14 percent, according to 2016 stats from Eurostat.

The strike is being supported by two of Spain’s most prominent female politicians Ada Colau and Manuela Carmena, the mayors of Barcelona and Madrid, respectively.

With a significant portion of the country participating in the strike, it’s sure to effect the nation’s daily routine. For example, the BBC is reporting that the Ministry of Transport has estimated that the strike will affect 300 trains in Madrid. El Pais also reported that demonstrations had temporarily halted traffic in Terrassa and Premià de Dalt.