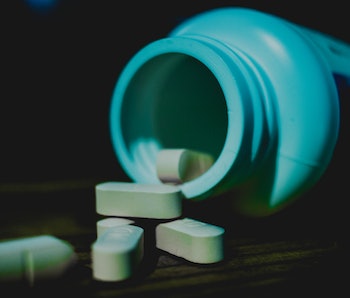 The opioid crisis in the United States has reached a fever pitch in recent years. Around 90 Americans die from an overdose every day, with more than 42,000 people dying from an overdose in 2016 alone. And according to new data from a cohort of pediatric doctors, children have not been immune to this epidemic, with the rate of hospitalization for kids due to opioids more than doubling over the course of study.

In a study published in Pediatrics on Wednesday, Jason M. Kane, Jeffer D. Colvin, Allison H. Bartlett, and Matt Hall demonstrate that the proliferation of opioids has coincided with an increase in overdoses in children under 18.

“The increasing number of adult drug prescriptions is strongly associated with rising pediatric exposures and poisonings,” the study says.

According to the CDC, the total number of opioid prescriptions peaked at more than 255 million in 2012 — that’s a prescribing rate of 81.3 prescriptions per 100 people. The rate dipped back down to 65.5 in 2016, but it remains much higher in some states, including Oklahoma, Mississippi, and Indiana.

The study relied on a retrospective analysis of 11 years of hospitalization data. The data comes from the Pediatric Health Information System (PHIS), which contains patient information from 49 different hospitals in 27 states and the District of Columbia. The data from PHIS accounts for around 20 percent of all pediatric hospitalizations in the United States.

The findings aren’t that surprising — if there are more opioids circulating in the population, more people will overdose. Still, it’s a testament to the particular problem caused by potent prescription medications. Unlike prohibited opioids, like heroin, prescribed drugs like oxycodone can be found in medicine cabinets around the country. That makes it quite easy for children to get opioids, even if they weren’t prescribed to them.

According to the study, there are typically two different ways youth suffer opioid overdoses. For young children, it’s often a case of accidental ingestion; pills are left in an accessible place, and kids will swallow them as a result of natural curiosity. Adolescents and teens, on the other hand, are more likely to intentionally ingest opioids, either for recreational purposes or for self harm.

The study really underscores the importance of treating serious prescription drugs with the same precautions one would use for other potentially harmful objects, like firearms. A great first step to addressing the opioid crisis is to cut down on opioid prescriptions, but it certainly wouldn’t hurt to establish best practices when it comes to storing medications. What’s clear is that more aggressive policies need to be implemented in order to cut down the number of pediatric overdoses.

“Current efforts to reduce prescription opioid use in adults have not curtailed the incidence of pediatric opioid ingestion,” the study said. “Additional efforts are needed to reduce preventable opioid exposure in children.”

Abstract: BACKGROUND AND OBJECTIVES: There has been a rapid increase in the rate of pediatric opioid-related hospitalizations. It is unknown how this increase has impacted the use of pediatric critical care. Our objective in this study was to assess the trends in pediatric hospitalization for opioid ingestions in a cohort of US children’s hospitals and, specifically, to evaluate the impact on pediatric critical care resource use.

METHODS: A retrospective cohort study of the Pediatric Health Information System was performed to identify hospitalizations for opioid ingestions from 2004 to 2015. Admission to the PICU and the use of naloxone, vasopressors, and ventilation were assessed by using billing data. The primary outcome measure was the trend in the rate of PICU admission for opioid-related ingestion over time, assessed by using Poisson regression.