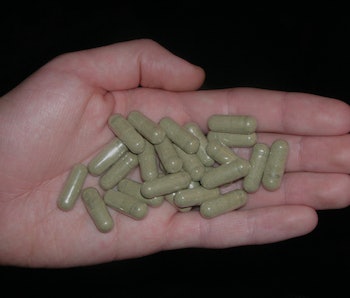 The herbal drug kratom (Mitragyna speciosa) has become something of a household name in the United States over the past decade, lining the shelves of convenience stores and smoke shops and arriving in mailboxes in inconspicuous packages from online retailers. Kratom, which has natural pain-killing qualities when smoked or ingested, offers reasonably affordable benefits for people who live with chronic pain or physical opioid dependencies, but federal drug regulators have serious concerns about its safety.

In a statement released Tuesday, the U.S. Food and Drug Administration outlined its case for categorizing kratom as an opioid, which could bring it closer to the same legal status as prescription opioid drugs like hydrocodone, oxycodone, fentanyl, and morphine. The FDA’s argument rests on several pieces of evidence, one of the most significant of which is a somewhat damning computer analysis of the chemicals contained in kratom.

Using computer models that created 3-D images of the active compounds in the drug, FDA scientists were able to compare their structures to known opioid compounds to predict how the chemicals in question will affect the human body.

“The model predicted that 22 (including mitragynine) of the 25 compounds in kratom bind to mu-opioid receptors,” reads the statement. This means that, if the computer model is correct, many of the chemicals in the leaves of kratom will fit into the same molecules in a person’s brain as opioid drug molecules fit into.

The announcement continues: “This model, together with previously available experimental data, confirmed that two of the top five most prevalent compounds (including mitragynine) are known to activate opioid receptors (‘opioid agonists’).” An opioid agonist is the scientific name for chemicals that we typically call opioid drugs.

Just because a molecule binds to a particular receptor, though, doesn’t necessarily mean that it causes the same effects as every other molecule that binds to that receptor. The strength with which molecules bind to receptors, known as “binding affinity,” determines how strong an opioid’s effects are. Fentanyl, for instance, has a very strong binding affinity, which accounts for the extremely low dose required for toxicity. In the analysis that the FDA’s argument rests on, the estimates of kratom’s binding affinity to the receptors that usually bind opioids are considered signficant.

“We found that kratom has a strong bind to mu-opioid receptors, comparable to scheduled opioid drugs,” the report reads. This strengthens the FDA’s case significantly, since it provides evidence that kratom is similar to prescription opioids on a molecular level.

The FDA also cited the number of deaths related to kratom: 44 so far. This is just as important as the chemical analysis because it demonstrates that this botanical product is not totally safe. The agency released analyses of 36 deaths that it cited in its November 2017 kratom announcement. Notably, many of these kratom-associated deaths also include other drugs that intensify the sedative effects of kratom. But these case studies will surely strengthen the FDA’s case

Proponents of kratom have argued that, since kratom’s safety profile is so much better than more conventional opioids, it’s still a good alternative for people who are trying to kick an opioid habit or deal with chronic pain. After all, elevating kratom to the same legal status as other opioids would make it inaccessible to people seeking a safer, cheaper alternative. And despite the fact that there are significant safety concerns associated with it, the 44 deaths attributed to kratom pale in comparison to the tens of thousands of people each year who die from other opioids.

It’s hard to say whether this latest finding will seal the deal for the FDA, which has been trying to change kratom’s legal status since at least 2016. But it’s definitely a major step toward including kratom in the Controlled Substance Act, and this time the FDA has science to back it up.