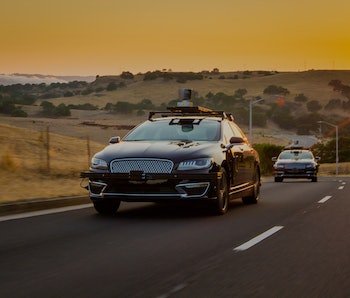 The era of autonomous cars just came one step closer. On Thursday, Aurora announced partnerships with the Volkswagen Group and Hyundai to integrate the company’s self-driving platform into the automakers’ vehicles. In the case of Hyundai, the pair believe they can bring level four autonomous cars to the marketplace in just three years.

The team has a bold vision for the future of autonomous vehicles. Volkswagen has been working with Aurora in Silicon Valley over the past six months to integrate hardware, software and sensors into the company’s vehicles. The automaker aims to use the technology to develop autonomous ride-hailing services for cities, a goal Volkswagen placed under the Moia brand in December 2016.

“In the future people can of course use our mobility app or digital virtual assistant to hail a self-driving electric vehicle to drive them conveniently door-to-door, or use our Volkswagen OneButton which has GPS, connectivity and a compass, as a small beautiful key fob with maximum convenience,” says Volkswagen chief digital officer Johann Jungwirth. “Working with Aurora, leading self-driving system company, will give us a giant leap forward in our mission to become the world’s leading provider of sustainable mobility, with self-driving vehicles.”

In January 2017, Tesla accused the company of stealing internal data. The dispute was quickly settled in April with Aurora paying a tiny sum of $100,000 and agreeing to an audit.

One year on, and Aurora now believes it can help Hyundai meet the ambitious goal of bringing a level four autonomous car to the roads by 2021. That’s a car capable of driving itself around in certain conditions — say, a city-wide area — and Hyundai aims to start with test programs in pilot cities. From there, the company will move to commercialize the vehicles.

“Combining our advanced vehicle technology that embeds the latest safety features with Aurora’s leading suite of Level 4 autonomous technology will advance this revolution in mobility with Hyundai in a leadership position,” says Woong Chul Yang, vice chairman of Hyundai Motor.

It may not be long before Aurora-powered pods are whizzing around a city near you.

If you liked this article, check out this video about spherical tires for self-driving cars.