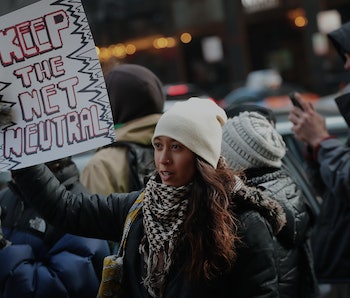 On Thursday the FCC voted 3-2 to repeal Title II regulations, known colloquially as the rules on net neutrality.

In response to the decision, internet activists and lawmakers are gearing up for what might become a long and complicated fight to protect the internet.

It’s important to remember two things. One: these are regulations, not legislation, so the FCC’s new plan — inappropriately called the “Internet Freedom Plan” — doesn’t have to go through Congress to be approved. Two: the regulations haven’t automatically taken effect. They will have to be entered into the federal registrar, which will probably take a couple of month, and will into effect 60 days after publication.

Once they do take effect, there will probably be a bunch of lawsuits filed against the FCC, for a whole lot of different reasons. Pro-internet non-profits, like Fight for the Future, could claim the legal argument that the new regulations, which repeal a plan that was implemented just two years ago, violate federal laws because they’re “arbitrary and capricious.”

Individual States Could Challenge the FCC

The “Internet Freedom Plan” prevents states and municipalities from coming in and creating their own internet regulatory rules instead of the ones defined by the FCC. The same was the case under Title II (the previous FCC plan that was just repealed), except that under Title II, the FCC had considerably more authority. In repealing Title II’s powers over ISPs, the FCC also chose to repeal its own powers. States could now argue that under the new plan, the FCC doesn’t actually have the right to impose its regulations on states. How’s that for irony?

Those Fake Comments Could Come Back to Haunt the FCC

New York Attorney General Eric Schneiderman is planning on launching a lawsuit against the FCC challenging the legitimacy of the new regulations. He’s cited the millions of fake comments that were submitted to the FCC’s web-based comments system ahead of Thursday’s vote, many of which used real names and the personal data of hundreds of thousands of New Yorkers alone. When Schneiderman’s office launched its investigation, it never received any cooperation from the FCC, and the vote went ahead anyway. He is claiming that the decision Thursday isn’t valid, because it’s the outcome of a corrupted process, among other things. Check this guy out:

Congress Just Needs to Figure this Out

At the end of the day, experts agree that Congress really just needs to create concrete, nuanced legislation specifically for the internet, and rid us of the back-and-forth of regulatory bodies controlled by either Democrats or Republicans. Some Democratic lawmakers have moved to file legislation that would erase the FCC’s latest decision, but it’s unlikely to pass in a Republican-controlled Congress. Still, given that this appears to be a rarely bi-partisan issue, if citizens continue to take up the cause of net neutrality with their congress people, we could at least see some debate on legislation that would override the FCC’s decisions.