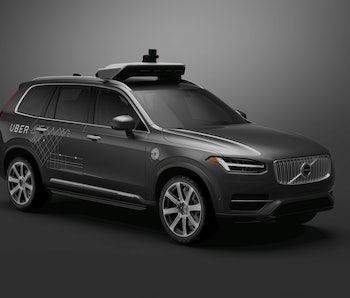 Uber’s autonomous driving ambitions took a big step forward Monday, with the announcement that Volvo would start supplying thousands of self-driving cars to the ride-hailing company — with deliveries to start in just two years’ time.

“We’re thrilled to expand our partnership with Volvo,” says Jeff Miller, head of auto alliances at Uber. “This new agreement puts us on a path towards mass produced self-driving vehicles at scale.”

The Wall Street Journal reports that Volvo will supply Uber with 24,000 autonomous vehicles in total, with more added to the fleet monthly starting 2019 until 2021.

The vehicle will be a “base car” based around the Volvo XC90 seven-seater sports utility vehicle. Volvo’s vehicle will have the “core autonomous driving technologies,” allowing Uber to add in its own self-driving technology and make the car ready for use with its ride-hailing platform.

The move is a big step forward for Uber, which has been publicly trying to build its own autonomous car fleet since May last year. The effectiveness of the project came under question after a leaked disengagement report in March showed that humans were taking over from company test vehicles at a rate of around once every mile. Jianxiong Xiao, founder of autonomous car software firm AutoX, derided the project as a “complete waste of resources.”

Volvo has worked with Uber before on autonomous vehicles, providing XC90 vehicles for the company’s homegrown self-driving efforts. But this new deal, which would account for around five percent of Volvo’s current total annual sales, brings this partnership to a whole new level.

“The automotive industry is being disrupted by technology and Volvo Cars chooses to be an active part of that disruption,” says Håkan Samuelsson, president and chief executive. “Our aim is to be the supplier of choice for AD ride-sharing service providers globally. Today’s agreement with Uber is a primary example of that strategic direction.”

Beyond the autonomous car deal, the Volvo XC90 is expected to play a big part in the company’s future plans. The automaker plans to launch an electric vehicle for around $35,000 in 2019, taking on the Tesla Model 3 for dominance of this developing space. The vehicle may use the Scalable Product Architecture, a modular chassis system currently used in the Volvo XC90.

Here’s five reasons to get excited about self-driving cars.

More like this
Innovation
3 hours ago
Want to buy an EV? Here’s what you need to know about the Inflation Reduction Act
By James Morton Turner and The Conversation
Innovation
8.9.2022 11:00 AM
This self-healing material could fix your dinged-up car in 30 minutes
By Molly Glick
Innovation
3 hours ago
Electric vehicles could transform U.S. cities — but not for the reason you think
By Erica D. Walker and The Conversation
Related Tags
Share: