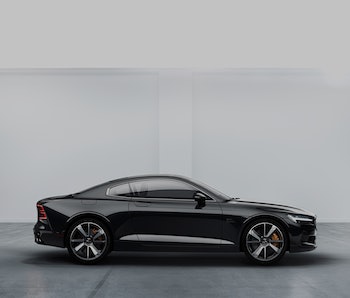 The car was shown off in Shanghai and boasts an eye-opening 600 horsepower, but the two electric motors will generate 218 HP on their own.

This first vehicle will still require gasoline, but future models — starting with the Polestar 2 and then the Polestar 3— will be fully electric. That prompted the company to take the unusual move of calling out the competition by name, targeting Elon Musk’s Tesla.

“Polestar 2 will be a mid-sized fully-electric car that will join the competition around the Tesla Model 3,” the company announced in a statement Tuesday. “Polestar 2 is currently in the engineering phase and will start production before the end of 2019, delivering higher volumes than Polestar 1.”

Wow, shots fired. But in the world of electric vehicles, competition is a good thing, especially for anybody who thinks about CO2 emissions from cars that run on fossil fuels, the same CO2 emissions that clog the atmosphere, resulting in rising global temperatures.

Volvo predicts that most people will only ever use the electric motors that power the two rear wheels of the Polestar 1 hybrid, too, as the car’s electric-powered range is about 93 miles (150 kilometers).

“We consider it an electric car with support from an internal combustion engine,” said Thomas Ingenlath, CEO of Polestar, in a statement.

How do you get a Polestar 1 if you want one?

All Polestar models will be available through the newly trendy subscription model service that’s being marketed as “all-inclusive.” Here’s how that shakes out, according to the company:

The subscription also includes pick-up and delivery servicing where Polestar contacts the customer to arrange a convenient time for scheduled maintenance. It will also consists of a number of car rental days and access to a range of concierge services.

The subscription will be for a fixed term of two or three years. At the end of the contract, the customer simply returns the car, or Polestar collects it and delivers their next Polestar experience. Polestar will then refurbish the vehicle and prepare it for a secondary subscription as a high-quality pre-owned Polestar car.

“Our vision is that the Polestar subscription model and services that we will offer will define the Polestar brand as much as our cars will. Services that exceed the needs, desires and expectations of the premium performance car customer are at the heart of Polestar, removing the inconvenience of ownership and allowing customers to purely concentrate on the pleasure of driving a Polestar car,” said Jonathan Goodman, Chief Operating Officer of Polestar.

The subscription is the only way you can get your hands on a Polestar 1, of which a scant 500 will be made before the all-electric Polestar 2 and 3 are produced.

The Polestar vehicles will be manufactured in China, partnering with two other companies also owned by its parent company, Geely, which bought Swedish automaker Volvo in 2010.

If you liked this article, check out this video of a Tesla Model X that predicts a car accident before it even happens.