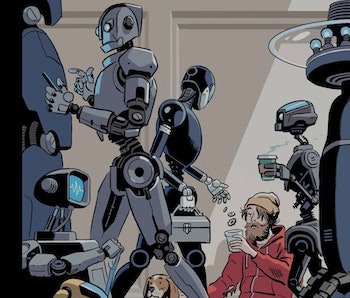 To illustrate the cover of its “money” issue that came out on Monday, The New Yorker magazine shows a bearded young panhandler sitting cross-legged on the sidewalk of future Manhattan, holding out a coffee cup as humanoid robots busily pass him by. One robot, fortunately programmed with pity, drops a combination of nuts and bolts into his cup. The panhandler’s dog, a Beagle, looks with surprise and concern at a robot dog walking by.

The cover was drawn for the magazine by R. Kikuo Johnson, who says he’s not too worried about his job being replaced by a robot — the subject of a new story in the magazine.

“When robots are advanced enough to be neurotic, then maybe I’ll be concerned,” Johnson said. “Though I don’t think too many of us choose this field for job security, anyway.”

Johnson’s blending of the everyday — a panhandler with dog holding out a cup as people walk by — is too cartoonish to take any viewer into the uncanny valley, but it’s striking none the less.

The story this imaginative illustration goes with, “Dark Factory” (“Welcoming Our Robot Overloads” in the online version), by Shellac Kolhatkar, describes how some workers at the Steelcase metal factory in Grand Rapids, Michigan, are jokingly called “Meat Robots.” (The company has seen automation take over more and more of the jobs previously held by humans.)

“A decade ago, industrial robots assisted workers in their tasks,” Kolhatkar writes. “Now workers — those who remain — assist the robots in theirs.”

Industrial robots that do the same basic task over and over are already here, but the story also observes the research around perfecting robotic hand design, one of the biggest challenges in R&D. “It’s very difficult, and probably not very cost efficient, for a robot to make a salad,” says one researcher at Brown University.

There are political results of disruption caused by automation, posits one CEO who brought his company’s manufacturing back to America from China, but automated much of the processes in order to compete with the cheaper Chinese labor.

“I think part of the reason populism is rising around the world is that the gap is getting too big,” said Michael Araten, CEO of toymaker K’Nex Brands. “Having so much inequality creates instability in a country. Maybe twenty years ago, we still had too many poor people, but they believed that they had a shot. I believe some of that is being sucked away.”

Carve out some time to read Kolhatkar’s fascinating story here, and maybe, work on your cartooning skills to prepare for our robot future.

If you liked this article, check out this video on why we’ll need universal basic income sooner rather than later, thanks to robots.

More like this
Innovation
7.28.2022 11:15 AM
A new robotic twist on the “Turing test” fools human subjects
By Sarah Wells
Innovation
8.1.2022 9:00 PM
This mind-bending material could turn us into chameleons
By Molly Glick
Innovation
8.9.2022 2:00 PM
A small robot on the ISS will practice performing surgery in space
By Doris Elín Urrutia
Related Tags
Share: