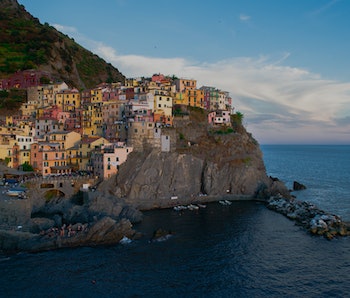 If you looked at an aerial view of Chicago, Toronto, or Los Angeles, you’d see three grids. But this linear aesthetic won’t be so common as new cities are built in the coming decades. In fact, they’re more likely to resemble a medieval hill town in Italy than the soaring skyscrapers of Blade Runner, according to David Galbraith.

A former architect who trained with Norman Foster (the mind responsible for Apple’s “spaceship” headquarters), Galbraith is now an entrepreneur and partner at the investment and advisory firm Anthemis who’s been instrumental in the user experience of the web. He co-authored RSS code, co-founded Yelp, and developed the one-line bios that have been used by Twitter and Facebook. Although Galbraith says his focus these days is in the world of business, he’s kept his foothold in the world of design via his Medium account, and he tells Inverse that he’s sure the future is not going to look like the inside of the Enterprise.

“There is an alternative future where the future looks very non-sci-fi. Where built environments start to look very natural,” he says. “Technology’s end goal is to be invisible. Computers used to fill up a room, and now they sit in our pocket.”

Cities just aren’t what they used to be

“Urban planning used to have to be on grids for a very good reason,” Galbraith says. “Medieval cities weren’t planned on grids, but American cities were because they were planned for the motor car. And they were planned to expand very quickly, and that meant there had to be a certain modularity to it.”

That spacial rigidity is about to go out of style, according to Galbraith. As transportation changes, he believes we won’t need cities to be organized around conventional roads. “We think of self-driving cars as being a disruption of the way cars work, but they’re probably going to disrupt public transit just as much, because you’re going to be able to hail your own train car,” he says.

Future transport pods could move you around cities in ways we’ve never seen before. Elon Musk’s Boring Company project is a good example, as it would employ a labyrinth of transportation under the surface, allowing the city we experience above ground to be more free of cars.

Galbraith also believes that as the information age progresses, with the GPS capabilities we have on our smartphones, city design will be allowed to become a lot more complicated. Meandering street structures of old cities like Paris or neighborhoods like New York’s West Village will inspire new design, which will reach new levels of intricacy because of our ability to easily navigate spaces with a device in the palm of our hand.

Bring on the baroque, because Galbraith believes future cities will be able to accommodate expansive decorative design. It’s no longer an expensive addition to add decoration to architecture; it can be introduced into modern cities with algorithmic design, where computers do the legwork to plan a building through algorithms.

In the past, buildings were designed using blueprints. “Blueprints really specified the dimensions of everything, which meant it was hugely cumbersome to design stuff; you had to specify everything,” Galbraith says.

Galbraith likens algorithmic design to a recipe. “You don’t need to give much information for recipes, but you can create enormous complexity and variety through recipes,” he says.

A series of pecan pies might use the same ingredients, for example, but no two will be exactly the same. Algorithmic design, as opposed to a rigid, blueprint-based design, will allow computer-generated building plans to take on various landscapes, producing products that are unique but employ the same function. You would get a different structure on a hill than on flat ground, but both could be built to get the same amount of sunlight, for example. Or accommodate a fancy, decorative archway.

Since no two structures need to prescribe to the same blueprint, they don’t have to look identical and can actually look extremely organic. Like the colorful villages of Cinque Terre, carved straight into the Italian coast.

If you liked this article, check out this video of 3D-printed concrete buildings.

Oh, hello. You’ve made it to the end of this story! Congrats! Now tell us how to make Inverse better. Take our user survey and maybe win an Amazon gift card! ⚡️

More like this
Innovation
8.12.2022 10:30 AM
Will Miami exist in 2050? 4 strategies could keep U.S. coastal cities afloat
By James Gaines
Innovation
8.17.2022 6:15 PM
Can we terraform Mars? Scientists may have made a major breakthrough
By Jeff Nagle
Innovation
8.13.2022 9:00 PM
Electric vehicles could transform U.S. cities — but not for the reason you think
By Erica D. Walker and The Conversation
Related Tags
Share: