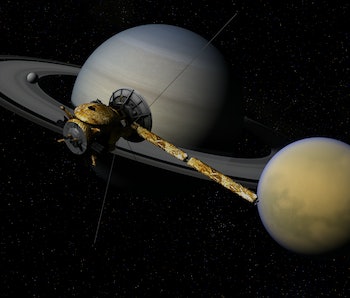 As Cassini prepares to take its final dive into Saturn just shy of its 20th birthday, many people in the scientific community are taking the time to reflect upon the spacecraft’s journey. But what about the non-scientists? What about all the humans who have ever gazed up at the night sky and felt small? Shouldn’t we care what the end of the Cassini spacecraft means to those friends and neighbors who are simply curious? After all, enhancing the public’s understanding of space seems to fit neatly into NASA’s vision: “We reach for new heights and reveal the unknown for the benefit of humankind.”

In that spirit, we approached people whose last name is Cassini to see how they felt about the spacecraft’s big plunge on Friday morning. It turns out that people are very interested, but they wish they knew more.

Cecilia Cassini is an Argentinian flight attendant and translator who lives in New York City. As soon as we started talking, she began to do her own research, and the world of her surname began to open up.

“It makes me very curious and proud to share that name!” she tells Inverse. Despite not knowing much about the Cassini Mission, she’s eager to know more about Saturn, Saturn’s moons, and the Renaissance-era astronomer Giovanni Domenico Cassini, after whom the spacecraft is named. She says that our interview made her think about how little the average person knows about space exploration. “What a shame, that I know nothing!”

Admittedly, it’s hard to relate to space. We read about it in the news when there’s a disaster or a crowning achievement, but for the most part, we live our lives on Earth without really being affected by objects that are hundreds of millions of miles away. Photographs, like those that the Cassini spacecraft has given us, make our cosmic neighbors feel a little more tangible, but for Marty Cassini, a lawyer who lives in south Florida, the orbiter is a little closer to home.

Here’s his story, in his own words:

I’m a second generation American. My father’s family is from France. Naturally, everyone always asks me if I’m Italian. So people ask how we got our surname. Well, my grandfather was an orphan in Paris, so they didn’t know the child’s name. He was given his first name after his adopted father and his last name after the street he grew up on. That was Cassini Street, named for the man who established the observatory under Louis XIV. So I’m literally named after the same man as the spacecraft.

Rue Cassini — rue means “street” in French — is a short street that runs just north of the Paris Observatory, which Giovanni Domenico Cassini helped open in 1671 and then ran until his death in 1712. By way of the Paris Observatory and this one-block-long city street, Giovanni Domenico Cassini has cast a long shadow that spans from his astronomy career in Paris — during which time he often went by the name Jean-Dominique Cassini — to his eponymous spacecraft’s launch from Cape Canaveral, then nearly a billion miles away to Saturn and all the way back to a man in Florida.

This connection has helped Marty Cassini stay on top of the developments with the spacecraft. He’s followed the mission for a couple years and was fascinated to learn about the Huygens probe landing on Saturn’s largest moon, Titan. He says that his friends even post articles about the mission on his Facebook wall from time to time.

Marty says the spacecraft plunging into the gas giant sparks his imagination, that it would be a good science fiction story.

“I’m super stoked that they’ve decided to crash it,” he says.

But Marga Cassini’s connection to the famed astronomer may be the most intimate of all, for she is one of his direct descendants.

“My mother and grandmother gave us the history and genealogy, which was given to her by her grandparents,” she tells Inverse. Born in Argentina, this retired social worker now spends her time in Mexico, studying the Mayan culture and pyramids in Merida and Yucatan. When asked about her feelings surrounding the Cassini spacecraft’s final dive into Saturn, her response is measured but enthusiastic:

It is a mixture of feelings, a moment of deep respect and pride for the accomplishments of that long ago generation of Cassinis that were, more than 400 years later, bestowed the honor of a space mission named after them. Its 20-year life span exemplifies the lives of those Cassinis of long ago: a life well-lived and a legacy for future generations.

As the Cassini spacecraft burns up upon entering Saturn’s atmosphere, its legacy remains. In this small way, the memory of an astronomer who died over 300 years ago influences the lives of an Argentinian translator and flight attendant, an American lawyer, and a retired Argentinian social worker.

During the reporting of this story, Marga and Cecilia, both of whom are Cassinis from Argentina, expressed their desire to communicate with one another. The final days of the space probe may yield more than just atmospheric data.