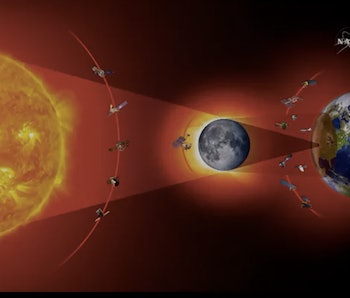 On August 21, a total solar eclipse will make its way across the continental United States for the first time since 1979. Other than causing amateur sky-gazers to flock en masse to places like Carbondale, Illinois, and Kansas City in order to get the very best views of the eclipse in America — and post the images to Instagram, Snapchat, Facebook, Twitter, and wherever else — the solar event also offers a big opportunity for hard science, which often doesn’t get its share of public interest.

“This is a generational event,” says Madhulika Guhathakurta, NASA lead scientist for the 2017 eclipse. “This is going to be the most documented, the most appreciated eclipse ever.”

During an eclipse, it’s easiest to see the sun’s corona, which is, otherwise, obscured by the gassy orb’s bright light. Research activities will be taking place across the states in the hopes of furthering observation of the corona and knowledge of the sun’s magnetic field — much of which is still a mystery. Scientists will also be trying to understand more about the eclipse’s effect on Earth’s atmosphere while the presence of the moon blocks out the sun’s rays.

“This is a social phenomenon, and we have a significant opportunity to promote this and do all the science that we can,” Guhathakurta said.

Below are just three of the experiments that will take within the “path of totality,” the epic name for the 70-mile-wide swath of the country within which the moon will completely cover the sun.

Measuring How Radio Waves are Affected by the Eclipse

Disturbances to the ionosphere — the layer of Earth’s atmosphere that’s ionized by solar and cosmic radiation — are known to affect radio waves and can even be capable of blocking them entirely. A total solar eclipse is a unique opportunity to study this phenomenon. Enter EclipseMob: a crowdsourcing project supported by the National Science Foundation. During the eclipse, students, and [anyone else who’s interested], will be manning receivers across the U.S. to collect data from radio signals traveling during this time. Participants will map two signals: one from the WWVB radio station in Colorado and one from a Navy transmitter in California. According to the EclipseMob site:

Crowdsourcing allows us to collect radio wave signals at locations all over the United States so we can study how the signals are affected as they travel along different paths. Disturbances in the ionosphere can cause further issues with communication around the globe. This can cause possible disruption to GPS signals and emergency communications that utilize the ionosphere when cell towers are down during instances such as hurricanes or other natural disasters.

With volunteers from 27 universities, 22 high schools, 8 informal education groups, and 5 national labs, the Citizen Continental-America Telescopic Eclipse Experiment, known as CATE, will document the eclipse as it passes through the continental U.S. Sixty-eight identical telescopes and digital camera systems have been handed out along the path of totality so that each group can capture high-quality images of the inner solar corona. At the end of the experiment, CATE will have produced a dataset spanning the continent’s totality and create a 90-minute movie of the solar corona.

This video and image data will help scientists analyze the sun’s corona, as well as the motion of coronal inflows, coronal mass ejections, and other active regions. Magnetograms located at each site will trace polar plumes that have appeared above the northern and southern solar coronal holes during previous eclipses. Scientists hope to measure any movement within the plumes, and the corona as a whole.

Chasing the Eclipse on a WB-57 Airplane

The best way to glimpse an unparelleled view of Mercury during the solar eclipse is from 50,000 feet in the air, apparently. Amir Caspi and Constantine Tsang of the Southwest Research Institute in Boulder, Colorado, will try to capture the eclipse on visible and infrared telescopes aboard two NASA WB-57 airplanes. By flying along the eclipse’s path (taking off from Houston, Texas, and flying over Carbondale, Illinois), high above 90 percent of Earth’s atmosphere, the researchers will be able to get some exceptional measurements of the sun’s corona. At 470 mph, they’ll also get about eight minutes of totality.

Moments after the total eclipse, Caspi and Tsang will turn their intention to Mercury. With the light still low, the post-eclipse moment will offer amazing views of the planet closest to the sun, which is usually far too obscured by radiation from the star. Scientists are hoping the infrared observations will shed more light on how Mercury’s temperature changes from day to night, and provide insight into the composition of its surface.

Must Read: How to Become an Eclipse Chaser