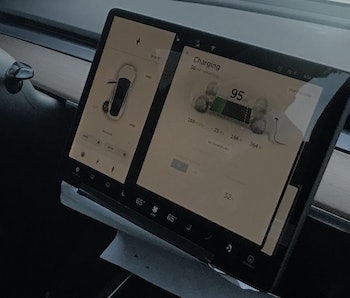 The Tesla Model 3 entered production this month, but many of the car’s key features are shrouded in mystery. It’s unclear which battery sizes consumers will be able to order for the car. Tesla has yet to confirm pricing for optional extras, and it’s still unclear how the car’s speedometer works in practice. The $35,000 vehicle, by far the cheapest car the company has ever released, uses just one computer screen as opposed to the two found on the Model S and X, with the central display taking over from the instrument cluster.

A report published by Electrek on Monday explains how this may work in practice. Two readers, Robbie and Chuck from Colorado, met a Tesla engineer driving a Model 3 at a supercharging station who was traveling from Fremont to Denver. When asked about the experience, the engineer said:

I asked him if he missed having an instrument cluster in front of him behind the steering wheel. He said you quickly get used to not having one there, only the touchscreen tablet to the right. He noted that it was especially helpful at night not having the glare of the instrument cluster right in front of him, so he could concentrate on the road, and he felt his night vision was better.

Tesla’s speedometer design may seem strange, but it appears to be legal. A representative from the National Highway Traffic Safety Administration previously told Inverse that speedometers must be visible to the driver when they have adapted to the ambient road light conditions and are restrained by the seat belt.

The company’s CEO, Elon Musk, has previously stated that the speedometer will be less useful in a fully autonomous car. Tesla has an end goal to make fully autonomous driving available to all vehicles manufactured after October 2016, as these cars have the necessary setup of cameras and sensors to support a future software version capable of automatically driving the car. In this situation, the driver may not care about the lack of a driver-side speedometer in the Model 3.

Musk has also said that when the speedometer does show up on the central console, it will fade in and out of opacity depending on whether it’s needed.

If the engineer’s testimony proves accurate, drivers may adapt to the new design with time.