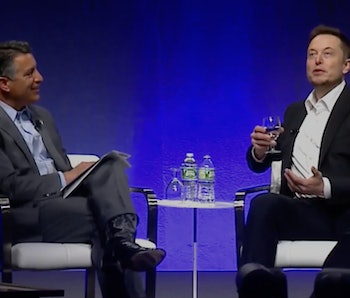 Speaking to around thirty governors on Saturday in Rhode Island, many of whom have auto-manufacturing plants in their states, Tesla CEO Elon Musk spitballed a few predictions about cars with Nevada Governor Brian Sandoval, including a colorful comparison to horses.

Below are Musk’s remarks about cars from the session that varied from NASA’s image problem to the looming threat of artificial intelligence.

Musk on Electrification of Cars and China’s Under-Reported Progress

Probably in ten years more than a half of new vehicle production is electric in the United States. China’s probably going go be ahead of that because China’s been super-pro EV. I don’t think a lot of people know this but China’s environmental policies are way ahead of the U.S. Their mandate for renewable energy far exceeds the U.S. Sometimes people are under the impression that China is either dragging their feet or somehow behind the U.S. in terms of sustainable energy promotion, but they are by far the most aggressive on Earth; it’s crazy. In fact, the coalition of Chinese car manufacturers just wrote the Chinese government to beg them to slow down the mandate, because it’s too much. They need to make 8 percent electric vehicles in the next year or in two years or something; they can’t physically do it. China’s by far the most aggressive on electric vehicles and solar. That’s a common misperception — that they’re not. It’s one Google search away to figure this out by the way. It’s pretty easy.

In 2037, Autonomy and Electrification are the Majoriy

Fully autonomous. There will not be a steering wheel. Twenty years? It will be like having a horse. People have horses, which is cool. There will be people who have non-autonomous cars, like people have horses. It would just be unusual to use that as a mode of transport.

Below’s a video of the full conversation. Skip ahead to the 58-minute mark to see the above exchange:

More like this
Innovation
8.9.2022 11:00 AM
This self-healing material could fix your dinged-up car in 30 minutes
By Molly Glick
Entertainment
8.5.2022 12:30 PM
For All Mankind Season 3’s space mogul is better than Elon Musk — here's why
By Ryan Britt
Innovation
8.1.2022 11:00 AM
This novel technology could jump-start electric vehicle production
By Molly Glick
Related Tags
Share: