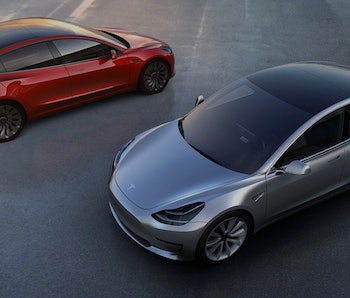 The first Tesla Model 3 is expected to be completed on Friday. Last week, CEO Elon Musk revealed the date when “SN1,” which stands for serial number one, will finally roll off the production line. It’s a momentous day for the company, as its entry-level vehicle brings its premium electric technology to a mass audience.

“Wanted to say thanks to all that own or ordered a Tesla,” Musk said on his Twitter page following the announcement. “It matters to us that you took a risk on a new car company. We won’t forget.”

The Model 3 is uncharted territory for the company. Starting at $35,000, the car is far cheaper than Tesla’s current lowest-price model, the $68,000 Model S. This lower price will come with increased demand: Around 400,000 people have placed an order for a Model 3, but Tesla currently produces around 100,000 cars per year.

So far, Model 3 production is moving along smoothly. Tesla set itself the “impossible” deadline to start production on July 1, a date that was largely intended as a way of holding suppliers’ feet to the fire to deliver parts on time. Astonishingly, Tesla managed to start production near the start of the month, in part thanks to the Model 3 clearing all regulatory requirements two weeks ahead of schedule.

Tesla is giving a serious boost to its production capacity to meet demand. The Gigafactory, a 5.8-million square foot factory in the Nevada desert currently under construction, will help Tesla meet its goal of producing 10,000 Model 3 cars per week by some time in 2018.

Musk doubled down on his production goal last week, claiming that Model 3 deliveries would grown exponentially. In August, the company is expected to produce 100 cars, in September it would produce over 1,500, and by December it’s expected to produce 20,000 Model 3 vehicles.

But the company faces competition from several other automakers at the lower price points, including the Nissan Leaf and Chevrolet Bolt. Tesla could have the advantage with its Autopilot mode, which builds a suite of cameras and sensors into every Model 3 shipped by the company. In the future, Tesla wants to roll out an update to enable full autonomous driving, making the Model 3 a tantalizing prospect for consumers looking to stay ahead with new technology.

The first 30 Model 3 customers will be invited to a launch party on July 28, where the company will hand over the first versions of its ambitious new vehicle. If successful, it will mark a new, mass market era for the company, and those lucky 30 will be among the first to drive the Tesla vehicle that brought in this new phase.