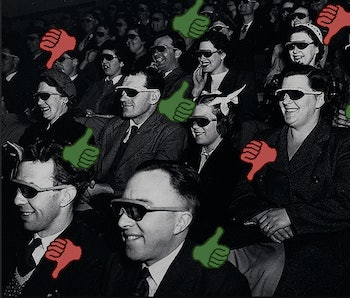 On Friday, the New York Times released its “25 Best Films of the 21st Century”, a list of the best movies in the last 17 years.

You will likely have a different opinion about what movies are the tops — the people of the Internet definitely voiced their reaction in a Tweet-storm of dissent.

This shouldn’t come as a surprise. While some movies hit the sweet spot of satisfying critics and general audiences, it’s rare for groups to agree on the quality of a movie. That’s not just a theory, it’s science, proven in research published in the journal Projections by researchers from Rutgers and New York University, who find that movie taste is even more idiosyncratic than they anticipated. Not only is it rare for critics and audiences to enjoy the same films, but there’s typically a large discrepancy with what non-critics think of movies as well.

This result is surprising, write the researchers, because previous neuroimaging studies found that when people watch a movie together their eye movement and their brain activity synchronizes in regions tied to perceptual processing. Despite this, when the researchers surveyed 3,204 people about 209 movies released between 1985 and 2004, they found that there was only a “very modest correlation” between what movies people enjoyed and what critics thought were good movies.

When they compared the film rankings non-critics gave to the existing rankings of 42 professional film critics, they found that film critics were more likely to agree with each other than with general viewers.

The researchers note that there could be multiple explanations as to why that is — maybe critics have synchronized opinions because they’ve been trained to think of what makes a good movie in the same way, or maybe they think only certain qualities move a movie to art.

“Ironically, something about being a critic seems to make the recommendations of critics unsuitable — relatively speaking — for predicting the movie taste of regular people,” the authors write.

This difference is easily seen with the film review site Rotten Tomatoes. For example, audiences gave Suicide Squad a fairly okay score of 62 percent, while critics scored it much lower, at a dismal 25 percent. Similarly, Batman v Superman received an audience score of 63 percent and a critics score of 27 percent. Does that make those movies bad? Depends on who you’re talking to.

Study co-author and NYU psychology professor Pascal Wallisch thinks that his research has implications far beyond the movie theater. If we can get down to understanding the idiosyncrasies of film tastes, maybe that can shine a light on other differences in perception. He hopes to keep pursuing this thread of research in order to gain critical insight into what inspires the differences between people’s core beliefs.

Wallisch argues that the research isn’t just proof that snooty movie critics are in a different world compared to the average Joe — it’s insight into how our preferences are shaped.

“If it’s the same movie and our brain is acting in roughly the same way, why do we disagree so strongly on whether or not we liked it?” Wallish said in a statement. “If the difference isn’t coming from the movie itself, it must tap into something in your personality — your world view, what makes you laugh, what makes you cry, what you find offensive; what upsets you.”

Ultimately, whether they be rotten tomatoes, thumbs up, or stars, your taste in movies is really yours alone.

More like this
Science
8.5.2022 1:00 PM
The most miraculous sci-fi movie on Netflix reveals a scientific debate over aging
By Tara Yarlagadda
Science
7.29.2022 1:30 PM
The darkest sci-fi movie on Amazon Prime could reveal real alien life
By Tara Yarlagadda
Gaming
20 hours ago
Everything we know about Natlan, Genshin Impact’s Pyro region
By Jess Reyes
Related Tags
Share: