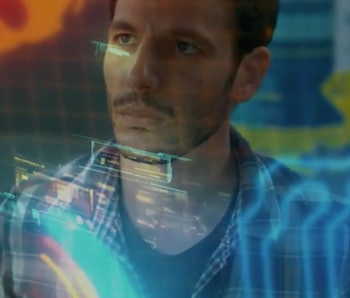 National Geographic’s Year Million, which premiered this month, offers a terrifying glimpse into the future of our species. The first episode focused on the rise, tracking a family as they deal with the death of their daughter and her subsequent resurrection into a cyborg clone. With its documentary-based format explaining in detail the technologies behind the storyline, the end result is a Black Mirror-esque tour-de-force turned up to 11.

Toward the end of the first episode, the United Nations declares artificial intelligence machines to have the same rights as humans. Although it sounds bizarre, it’s one of the less farfetched ideas put forward. Legislators and experts are indeed discussing this today.

It’s an idea already under discussion by politicians. Last year, the European Parliament drafted a motion that would define robots as “electronic people.” This could involve robot owners needing to replace the social security payments lost through automation.

Benoît Hamon, the Socialist Party presidential candidate in France’s most recent election, proposed a tax on robots as part of his campaign. Companies that replace workers with machines face higher charges to offset the incentives to remove humans from the equation. It’s a sentiment Bill Gates agrees with, explaining that governments “can’t just give up that income tax”:

But even beyond finances, researchers are asking whether we need a “kill switch” to stop a machine from acting in a way we don’t want it to. The European Union’s Legal Affairs Committee raised the prospect of a mandated kill switch back in January, and researchers at the Machine Intelligence Research Institute believe a switch will be needed so a machine cannot avoid termination in order to continue completing this task.

“It will estimate that, if it is turned off, it is less likely to achieve its goals, and hence will prefer to avoid that,” Dr. Stuart Armstrong, a researcher at the Future of Humanity Institute at the University of Oxford, told Inverse in November. “Though note that A.I.s can be copied, so they will be more flexible in their definition of death.”

This could influence the sort of laws and ideas that develop around robo-rights. If a machine develops a self-preservation instinct through its desire to continue working, it’s hard to argue that its desire is less valid than our own desire to stay alive. Our ability to empathize with the machines could lead to us granting rights.

The debate over whether we will interpret these machines as “like us” is playing out through the robotics community’s reactions toward sex robots. In the future, it is theorized that advanced machines will be capable of forming emotional bonds with us, creating more immersive relationships that lead us to bond with machines. But some reject the notion that machines could ever simulate something we may mistake for consciousness.

“Consciousness is a property of life, so you have to be living, but it’s also species-specific,” Dr. Kathleen Richardson, head of the campaign and a senior research fellow in the ethics of robotics at De Montford University, told Inverse in a July interview. “I do think it’s a property of being a living being.”

Others see the shift to humans forming bonds with machines as inevitable.

“We can’t help but theorize about what people might be thinking and empathize with how a robot might be feeling,” anonymous blogger Girl on the Net told Inverse.

Year Million tackles both sides of this debate. The parents form a bond with their A.I.-powered daughter almost immediately, but an incident at the park with a mother firmly against artificial intelligence leaves the family shaken. Even a million years from now, the answers aren’t clear.

We’re a long way off the United Nations granting robots full personhood, but even today we’re trying to decide whether robots should pay tax, form bonds with people, and whether they have a right to life.