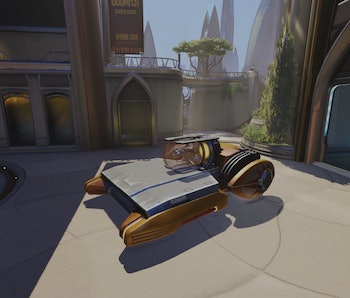 Overwatch is more than just one of Elon Musk’s favorite video games to play — it also predicts the future of human technology as we know it, and it’s a future in which flying cars are a ubiquitous reality by the late 2070s.

Overwatch doesn’t exactly have a straightforward story, so players spend their time in teams, fighting with guns, monkeys, magic noise, and time-based pseudoscience to control zones or escort payloads to destinations. Those payloads — and every other car for that matter — are always flying cars. Sometimes you’re safeguarding the transport of weapons like the Doomfist gauntlet. Other times, you’re escorting sassy celebrities across Hollywood. Every single one of these cars hovers above the ground in some fashion, but now, everything’s changed.

A recent update, Uprising, takes place seven years prior to the main events of the game. The automotive tech of Overwatch has clearly changed since then, because during the course of the event, a squad of four familiar characters take to King’s Row in London to root out the robot terrorist organization known as Null Sector. While there, they find this:

Game director Jeff Kaplan once said that the only half-serious rule for Overwatch was that “every car must fly” (and no cats in jetpacks).

In some capacity, that rule makes perfect sense. The game is said to take place in 2076; that’s 59 years into our future. The relatively new map, Oasis (featured below), features a constant stream of hover cars tearing along a typical-looking road — so the cultural shift is complete by that point in time. There isn’t a wheeled car in sight.

Every car, even the casual commuter car, hovers. But seven years prior, in 2069, we see the rugged Humvee-esque vehicle parked in King’s Row. We can only assume that the real cultural shift over to hover cars occurred across these seven years. In our own world, hover cars are a distant reality.

Though Elon Musk thinks flying cars are a bad idea, Uber has ambitious plans to make them a reality, as do plenty of other companies. Flying cars are one thing, but even hovering cars like those typically featured in Overwatch would eliminate friction on wheels, thus reducing typical fuel expenditures, assuming aerial suspension doesn’t require an exceptional amount of fuel.

But for now, we can take Blizzard’s prediction at face value that we’ll be overrun by flying cars within 60 years.