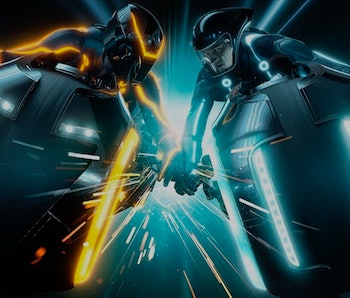 Artificial intelligence will blur the boundaries between what’s real and what’s simulated, Hitachi president Toshiaki Higashihara has claimed in a new interview. A.I.-powered robots will serve humanity throughout everyday lives, and much like how children today will struggle to picture a world without the internet, future generations will struggle to pick apart where intelligent machines begin and end.

It sounds like something out of Tron, where a computer programmer enters a virtual world and tries to escape, but Higashihara’s examples really don’t feel that farfetched. People will grow accustomed to making financial transactions in simulated environments, for example, leading to a society where the two grow intertwined. Robot workers, learning from human masters, will also train up new employees, passing on old skills to young minds.

Higashihara predicted in the interview published Wednesday that by 2045, young adults won’t remember a world without this heavy dependence on A.I. That’s only around 30 years away, meaning the shift will take place well before that, impacting kids born around 10 years from now.

Tech CEOs have previously called for stronger protections against this coming shift. Brad Wardell, head of Stardock, warns that if policy makers don’t act now, these new machines could lead to a mass spike in global inequality. Others have called for a universal basic income to cushion the flow of manufacturing jobs moving towards robots.

The major challenges, Higashihara explained, would be training up engineers on respecting ethics in A.I. If developers aren’t careful, they could design systems that ignore crucial social issues.

It’s a global change that will have far-reaching consequences, but it doesn’t necessarily mean that A.I. will reach singularity. The theoretical point where machines overtake humans, Higashihara argues that A.I. could beat humans in terms of processing information, but other aspects of intelligence will remain out of its grasp. “It will not lead to the emergence of A.I. with a will of its own,” he said.

More like this
Innovation
8.11.2022 11:00 AM
“Quantum materials” could give the human brain a run for its money, scientists say
By Nathaniel Scharping
Innovation
8.5.2022 11:00 AM
Alexa could diagnose Alzheimer’s and other brain conditions — should it?
By Joanna Thompson
Innovation
8.13.2022 9:00 PM
Want to buy an EV? Here’s what you need to know about the Inflation Reduction Act
By James Morton Turner and The Conversation
Related Tags
Share: