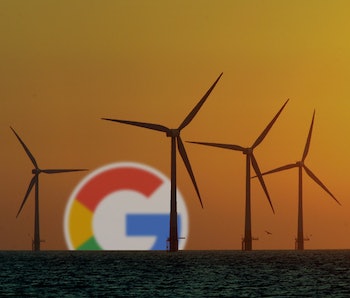 On Tuesday, Google revealed that it will run 100 percent of its global operations on renewable energy starting next year.

“I’m thrilled to announce that in 2017 Google will reach 100% renewable energy for our global operations including both our data centers and offices,” Google’s senior vice president of technical infrastructure Urs Hölzle writes in a blog post.

That’s a big deal, because according to The New York Times, Google used enough energy to power the entire city of San Francisco last year.

Google is the world’s largest buyer of wind and solar energy, as it purchases 2.6 gigawatts annually to power its data centers and offices. The company has 20 renewable energy project in locations like Oklahoma, Sweden, and Chile, and Hölzle said that Google’s purchasing commitments will result in a $3.5 billion global infrastructure investment.

Hölzle explained that investing in renewable energy makes business sense, as having “a long-term stable cost of renewable power provides protection against price swings in energy.”

However, he says the company — whose motto was “Don’t Be Evil” at one point — is also investing in clean energy for the sake of the planet.

“The science tells us that tackling climate change is an urgent global priority,” Hölzle wrote. “We believe the private sector, in partnership with policy leaders, must take bold steps and that we can do so in a way that leads to growth and opportunity. And we have a responsibility to do so — to our users and the environment.”