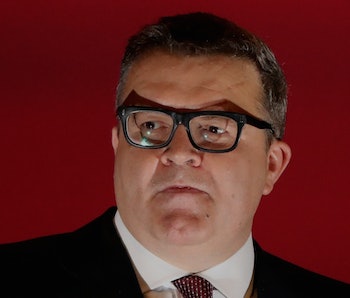 The British Labour Party has started a new “Future of Work Commission” to develop policy around technologies like drones and robots that will automate millions of jobs. Deputy leader Tom Watson, in a story published Tuesday, said that the committee will meet for the first time that day to discuss how politicians should deal with the coming workplace revolution.

“It is vital the Labour Party does this,” Watson said. “These seismic changes go to the heart of who we are and they will shape our economy and our country for decades to come.”

The work follows widespread discussion at the party’s conference in September. Party figures are worried that Labour needs to find an answer to what will happen to people’s jobs if a robot takes over.

It’s not just factory laborers vulnerable to automation. Watson cited professionals like architects and lawyers, who are at risk from advanced A.I. capable of performing analytical research. In the case of lawyers, one student has already produced a chatbot capable of answering housing questions, while startup Luminance has managed to automate the diligence process in mergers and acquisitions.

“Nothing’s going to be off the table,” Watson said. “So we’ll be looking at cutting edge theories, talking to political philosophers about the big questions. About whether work has moral value in itself, about what gives us purpose if we don’t work, about new ideas like community ownership and universal income.”

The commission sees its work as filling a crucial knowledge gap. A Labour-commissioned poll from YouGov found that just 20 percent believed their employer had given them enough information about the impact of automation on their job. The commission is expected to produce a report before the party’s annual conference next fall, which will form the basis of the party’s “Workplace 2020” strategy, when the next election is currently scheduled to take place.

“We risk creating a winner takes all economy, where the benefits of automation accrue to those who are fortunate enough to own or control the new technologies that make it possible,” Watson said. “We need to ensure the wealth they create is shared more equally and that everyone benefits from the explosion of entrepreneurial energy they have unleashed.”

It’s not certain that the party would be able to implement these policies after the next election. Labour has slid further in the polls since Theresa May took over from David Cameron as Conservative leader and prime minister in July. A Britain Elects polling average found Labour would receive approximately 28.2 percent of the votes if an election were held today, while the Conservatives would receive 41.5 percent. At the 2015 election, the parties received 30.4 percent and 36.9 percent of the vote respectively.