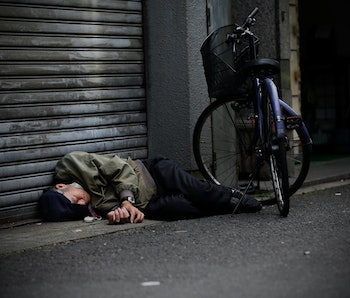 Joshua Browder’s lawyer is a robot.

In 2014, Browder created DoNotPay, a free online service that used an algorithm and an encyclopedic knowledge of the British and American legal systems to help people get out of parking tickets. The website took off, and now Browder is adapting his robotic system to help homeless people in the UK find housing and get off the streets — the latest application in a line of big plans to use artificial intelligence to aid the most disadvantaged in society.

“Not enough people know their rights,” Browder, a British student at Stanford University, told Inverse. Protections exist for a range of areas, like banking and housing, but getting that information can be hard. “It’s amazing how many laws there are to protect people.”

Chatbots, where people type questions to a computer and receive written responses, are currently all the rage in A.I. circles. Some, like Facebook’s Messenger bots, help people book restaurant tables or find out movie times. Others are more unorthodox: Record Bird gives music recommendations, while Microsoft’s Tay bot spewed out racist tweets until the company promptly shut it down.

Unlike Tay, DoNotPay has already proven its usefulness. Since it launched in 2014, the bot has helped over 160,000 people get out of parking tickets in the UK and U.S., asking them simple questions and calculates the best next steps for users. The service is free, making it available to everyone regardless of their socioeconomic standing, provided they can access the internet.

“The rich currently have high paid lawyers that can get them the best information, while others are stuck paying ridiculous sums of money,” Browder says. “I think this will level the playing field.”

So far, DoNotPay has been a big success. Browder said that lawyers made of flesh and blood are even seeing DoNotPay impacting their bottom line, which could spell trouble for professionals in other fields as the service expands.

Still, the chatbot may have some blind spots that keep human small claims lawyers in business. “Areas that require compassion may be a bit inappropriate,” Browder says.

Parking law is one thing, but homelessness is a totally different set of issues, and DoNotPay needed some significant updates to the ticket-fighting system to help it house the needy. Browder approached several lawyers for help, filed freedom of information acts to find out why people’s UK housing assistance applications were approved, and collected legal advice on how someone would qualify for assistance.

“A big problem is people don’t know they’re legally homeless in the first place,” Browder says. In the UK, if you meet five basic criteria, the local council is compelled to help find you housing.

Browder is working with Centrepoint, the UK’s largest youth homelessness charity, to help get the word out. He’s also hoping that publicity from free newspapers will reach people that otherwise won’t hear about it.

One day, Browder hopes that the law-bot can help people outside the UK as well. He’s currently working on a project to help immigrants claim refugee status in the UK in a partnership with some of the top lawyers at Freedom House, an international watchdog and advocacy organization.

Because most of the system is automated, Browder has figured out how to convert the program to help speakers of other languages understand their rights. He’s working on another project that can help Spanish speakers understand complicated legal advice and processes as well. “To create a thousand word legal letter is a challenge even for a perfect English speaker,” he says.

Many areas of the law are formulaic, ripe for the sort of analysis DoNotPay excels at. Whichever projects come next, Browder says the site will expand its mission to explain legal rights in a simple way, to those who need them most. And it can still get you out of a parking ticket.

More like this
Innovation
7.28.2022 11:15 AM
A new robotic twist on the “Turing test” fools human subjects
By Sarah Wells
Innovation
8.5.2022 11:00 AM
Alexa could diagnose Alzheimer’s and other brain conditions — should it?
By Joanna Thompson
Innovation
7.25.2022 9:00 PM
One gene could boost plants’ resilience to extreme weather — and store more carbon
By Claire Cameron
Related Tags
Share: