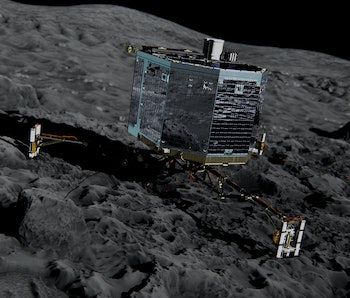 The European Space Agency made history when it managed to land the Philae probe on a comet for the first time ever, back in November of 2014 as part of its Rosetta mission. For a while, the situation was like a honeymoon — ESA scientists managed to collect unprecedented data about the structure and composition of these big, hurtling chunks of ice and rock.

And then, on July 9th, 2015, the ESA hit complete radio silence, and has not heard from Philae for more than seven months. It’s unlikely the lander left its perch on the comet, 67P/Churyumov-Gerasimenko. Nevertheless, as the weeks drew on, the hope we could still get back in touch with the lander dwindled.

On Friday, the ESA essentially announced it was calling it quits on getting Philae to phone home, acknowledging that conditions on 67P are changing in a way that the lander likely faces “eternal hibernation.” As the comet begins to move farther out in the edges of the solar system, Philae will plunge into extremely low temperatures that won’t allow its instruments to stay operational.

“The chances for Philae to contact our team at our lander control center are unfortunately getting close to zero,” Stephan Ulamec, Philae project manager, said in an ESA statement. “We are not sending commands any more and it would be very surprising if we were to receive a signal again.”

It’s a pretty unfortunate revelation, but this day was going to come. Philae’s landing was incredible, but not perfect — the lander bounced awkwardly off the surface several times before it found a decent spot to settle down. It could not, however, find enough sunlight to power itself. Philae completed about 80 percent of the first part of its scientific studies before falling asleep after 60 hours. It woke up intermittently, but passed out for good in July.

The team is going to keep communications channels open, but at this point, the ESA is saying goodbye.

Meanwhile, the rest of the Rosetta mission still has quite a bit of time left to finish gathering data and images before the ESA plans to close the mission off with an epic crash landing of the main orbiter. That is the way you wanna go out in space.

More like this
Science
8.10.2022 3:00 PM
Asteroids may have carved Earth's landforms as we know them — study
By Doris Elín Urrutia
Science
8.12.2022 10:00 AM
45 years ago, the first Space Shuttle made history without going to space
By Allie Hutchison
Innovation
8.10.2022 9:00 AM
Scientists may have revealed the ancient secret behind China’s Bronze Age
By Sarah Wells
Related Tags
Share: