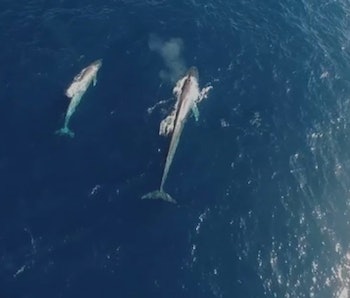 National Geographic posted a drone-captured video of a mother blue whale swimming through Southern Ocean waters with her calf Thursday. The footage was captured in January by crew members of the Sea Shepherd Global (SSG), a non-profit marine wildlife conservation group, who were working to disrupt poaching while stationed aboard the ship Steve Irwin.

NG titled the piece “See Rare Drone Footage of Blue Whale Mom and Calf,” classifying it as “rare footage” — this is the clip:

However, as it turns out, it may be “rare footage,” but a Google search reveals it is not the first such recording — although it is true there aren’t many readily available drone videos of blue whales in the wild — but other examples are findable, such as this clip posted by Barcroft TV in August of 2015, dubbed “Blue Whale Drone Footage: Swimming With The World’s Biggest Animal:”

Another was shared by the Loreto Sea and Land tour company located in Loreto, Baja California Sur in September of 2015:

An earlier find was posted in June of 2015, by the Dana Wharf whale watching charter vessel company, based out of Orange County, California:

… and June 2015 turned out to be a good month for blue whale flybys, as evidenced by this quick video captured off of San Diego by the SD Expeditions ocean adventure company:

Correction: An earlier version of this article did not properly credit the SSG for the footage. We regret the error.

More like this
Gear
November 17, 2022
Google’s new photo search feature wants to serve you food — and probably ads
By Ian Carlos Campbell
Innovation
17 hours ago
This smart bandage does the work of a doctor
By Joanna Thompson
Innovation
November 28, 2022
How Nintendo's weirdest hardware flop could spice up the Metaverse
By Sarah Wells
Related Tags
Share: