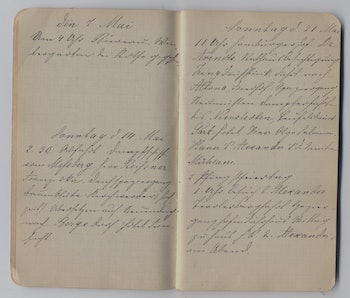 Writing is not like assembling IKEA furniture: You can’t build your skills by reading an instruction manual and then viola, product assembled. Particularly in fiction, you largely learn by doing. There’s no guaranteed how-to for improving; you simply dive in swimming. Naturally, this means that insane writing hacks can be found all over the place. I tried one such tried-and-true old school hack — copying down some of my favorite classic short stories by hand, the way Jack London and Robert Louis Stevenson did— to see how it might pan out.

This is, in a sense, the cheapest and most readily available writing instruction available in the world, second, perhaps, only to reading itself. After all, the neurological science is there — people retain information more readily when they write notes out by hand. The pieces I chose to monkishly hand-copy were J.D. Salinger’s A Perfect Day for Bananafish, Ernest Hemingway’s Hills Like White Elephants, and David Foster Wallace’s Incarnations of Burned Children.

Copying them down didn’t change my writing on a micro level. Do it frequently enough and writing takes on the character of walking: You shamble ahead without giving it much thought unless somebody points out your weird shuffly steps. Otherwise, your thoughts are on your destination and on the sidewalk ahead.

Sentence to sentence, then, it didn’t have much impact. Sometimes I write short sentences. Sometimes I write long sentences filled with semicolons or dashes — and my tendency to mix the two is not going to change. Writing out Hills Like White Elephants isn’t going to make me suddenly wax nostalgic about When Men Were Men in staccato snippets.

But what it did do was force me to stop and smell the ink stains.

I am a very fast reader. That’s not a humblebrag; it’s just a fact when you’re a lifelong reader and writer. I’m in the slow lane for many other things in life, but I devour pages rapidly. But copying a story by hand forces you to slam on the brakes. A scene that would normally take you five minutes to get through takes three times as long — and makes your hand cramp, to boot.

Scientists say writing things out by hand boosts your cognitive abilities. And while time was slowed down, I found myself notice things. I noticed, for instance, how in A Perfect Day for Bananafish, Salinger meticulously describes each character — what they wear, what impression they give off — while devoting very little time to describing the setting. Yet you never falter in picturing the scene: the hotel room, the beach. About Muriel Glass, he writes, and I have now written, with my own fingers, “She was a girl who for a ringing phone dropped exactly nothing. She looked as if her phone had been ringing continually ever since she had reached puberty.”

We don’t get any such pithy summations of the beach. But when I read, I see everything play out cinematically. I have a one-woman casting committee that chose actors to visualize as the characters and a one-woman location and set-building team. The finest writers give me the materials to build such scenes seamlessly. They conjure these faces and locations without any effort from me — otherwise, I will be distracted and unable to get into the story until I do it myself. If the main character is inadequately described, I’ll put down the book and waste time on Google images, trying to find a face to picture. Ditto on locale. I’m a weirdo, but I’m a weirdo who will lose focus from your book if you make me run to Google.

According to Yale psychologist Paul Bloom, there might be something to the this whole handwriting thing. “The very act of putting it down forces you to focus on what’s important,” he told The New York Times. “Maybe it helps you think better.”

In this case, it forced me to think about how Salinger balances constructing the world of his story and handing the reader minimal tools to build it themselves. Everything else in A Perfect Day for Bananafish is described strongly enough that you don’t notice the vague surroundings until you read it at a snail’s pace. Hills Like White Elephants, by contrast, spends all its time on surroundings and almost none on its actual subject matter (at least overtly).

Incarnations of Burned Children is a special animal, a breathless rush of long sentences that picks apart the inner lives of two parents of a toddler during a crisis. It would be nearly impossible to imitate successfully, looping in and out of rambling thoughts in that particular way DFW did.

But as different as they are, all three stories exemplify how, to paint a picture of a world, you can’t overload the canvas. If each of these stories had given equal treatment to all three elements — setting, character descriptions, aand characters’ inner lives — they would seem indulgent and bloated. And I won’t only heap that upon other works; I know this firsthand. When I was sending the first draft of my novel off to agents, one rejection letter commented, “I felt that there was too much detail in some of the scenes.”

My first instinct was to raise my eyebrows: How can one possibly have too much detail? Surely this person doesn’t know anything about books (never mind that that’s their profession).

But this handwriting exercise helped me to see that handing the reader too many tools is distracting in its own right. If A Perfect Day for Bananafish had described the hotel room as meticulously its the characters, that final horrifying scene wouldn’t have its gut-punching immediacy:

It took my hand-stacking each of those words onto the page, one by one, to fully appreciate the tempo at work; its mounting dread and dreaminess. Hand-writing classic short stories might not have automatically invigorated my own writing as if I’d swallowed a performance-enhancing drug, but it helped me to see that each scene is a balancing act, and you never want to pile too many things on the scale.

But if you try this at home, be warned: Your hand will cramp.

More like this
Innovation
16 hours ago
A wild new plane-train hybrid could whoosh you to your destination — if it can get off the ground
By Molly Glick
Innovation
8.5.2022 6:30 PM
This breakthrough stem-cell therapy could reverse genetic blindness
By Charles Q. Choi
Innovation
8.5.2022 11:00 AM
Alexa could diagnose Alzheimer’s and other brain conditions — should it?
By Joanna Thompson
Related Tags
Share: