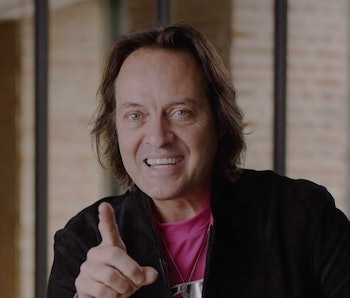 When last we left CEO and President of T-Mobile US John Legere, he had some choice words for the nonprofit digital civil liberties watch group The Electronic Frontier Foundation (EFF):

Which led to a response from a bevy of Twitter users, some T-Mobile customers, who were not pleased with Legere’s unfriendly jab. A few examples:

Before long, Legere offered some notes of recognition toward the EFF:

Meanwhile, the EFF made sure to enlist Twitter users to respond:

…and also offered a blog concerning the pointed Legere comment directed their way. The write-up, Friends, Please Tell T-Mobile’s CEO About EFF, links back to an earlier post explaining how the organization came to the conclusion that T-Mobile is “throttling”—the intentionally slowing of internet service—every video it’s streaming.

The T-Mobile president posted this video before his Twitter response to EFF—be sure and listen for the part that says “we built technology to optimize for mobile screens and stream at a bitrate designed to stretch your mobile data consumption. You get the same quality of video as watching a DVD but now use only one third as much of your data…:”

This is where the question lies: Binge On, the T-Mobile program that drops video content to a bitrate equivalent to 480p in order to ease the burden on data plans—is it legal to do such a thing?

The FCC Net Neutrality rules clearly state that “A person engaged in the provision of broadband Internet access service, insofar as such person is so engaged, shall not impair or degrade lawful Internet traffic on the basis of Internet content, application, or service, or use of a non-harmful device, subject to reasonable network management.” So, can T-Mobile reduce bitrate, even by companies that say it’s OK to do so with their content as part of Binge On—and furthermore, is T-Mobile doing this to video content providers who are not part of Binge On?

Legere posted an online letter Monday that explains — in his words — why Binge On is not a throttling campaign. He writes:

“…here’s the thing, and this is one of the reasons that Binge On is a VERY ‘pro’ net neutrality capability — you can turn it on and off in your MyTMobile account – whenever you want. Turn it on and off at will. Customers are in control. Not T-Mobile. Not content providers. Customers. At all times.”

In addition, he also apologizes about the whole “EFF—who the F are you” fiasco:

“I will however apologize for offending EFF and its supporters. Just because we don’t completely agree on all aspects of Binge On doesn’t mean I don’t see how they fight for consumers. We both agree that it is important to protect consumers’ rights and to give consumers value. We have that in common, so more power to them. As I mentioned last week, we look forward to sitting down and talking with the EFF and that is a step we will definitely take. Unfortunately, my color commentary from last week is now drowning out the real value of Binge On – so hopefully this letter will help make that clear again.”

The EFF has not posted a response, and as of this writing the open letter tweet posted above is the last tweet from Legere…stay tuned.

More like this
Innovation
19 hours ago
“Quantum materials” could give the human brain a run for its money, scientists say
By Nathaniel Scharping
Innovation
8.9.2022 11:00 AM
This self-healing material could fix your dinged-up car in 30 minutes
By Molly Glick
Innovation
8.8.2022 10:00 AM
A wild new plane-train hybrid could whoosh you to your destination — if it can get off the ground
By Molly Glick
Related Tags
Share: