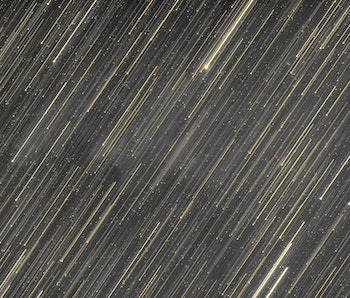 The start of the new year brings along a stunning, elusive meteor shower to light up the night sky.

The Quadrantid meteor shower will kick off 2022’s sky-gazing series with bright fireballs that originated from an asteroid rather than a comet. The shower peaks in January during a new Moon, making for ideal viewing conditions.

When can I see the Quadrantid meteor shower?

The Quadrantid meteor shower peaks overnight from January 2 to January 3, hitting its peak hours at 4:40 a.m. Eastern on January 3, 2022.

But you may be able to spot one of its fireballs anytime between December 26 to January 16 when the shower is active. At peak hours and during a dark night, the Quadrantid can produce between 50 to 100 meteors, with the average being around 80 meteors.

And this year, sky gazers are in luck as the shower’s peak coincides with a New Moon.

A New Moon marks the beginning of a lunar cycle, when the Moon is wedged between Earth and the Sun, resulting in a dark landscape barely visible to the naked eye.

During that time, the Moon’s light does not compete with other celestial objects in the sky.

How to watch the Quadrantids meteor shower?

Although they have a narrow peak window of only four to six hours, the Quadrantids are still very popular because they are fireball meteors. Fireballs come from larger particles, which means they are much brighter, and their light and color last longer than your average meteor shower.

The shower is better viewed in the Northern Hemisphere since it appears to originate from a northern point in the sky. Although you don’t need any special equipment to view this meteor shower, it is best to find a location far removed from interfering light and to block out any kind of flashlight or electronic device.

You should allow your eyes to get accustomed to the dark for about 30 minutes before viewing time.

Look toward a patch of sky where the Big Dipper, Bootes, and Draco intercept to find the fireballs.

Where do the Quadrantids come from?

Meteors are made up of debris from comets or asteroids. On its orbit around the Sun, the Earth passes through some of that debris, causing it to collide with our planet’s atmosphere.

As the debris flies through our atmosphere, the particles start to disintegrate and burn up, creating the bright streaks of light we see in the sky.

Although most meteors come from icy comets, the Quadrantid shower is believed to originate from an ancient asteroid. Asteroid 2003 EH1 orbits the Sun roughly every five and a half years. But this small asteroid, which measures about two miles across, may have once been a comet that astronomers observed nearly 500 years ago. So yeah, it’s complicated.

Adding to the mystery of the Quadrantid, the radiant point in the sky from which the meteor shower appears to come from is obsolete.

The Quadrans Muralis constellation — the supposed origin point — was discovered by French astronomer Jerome Lalande in 1795. But the International Astronomical Union removed the constellation from the list of recognized constellations in 1922.

Alternatively, the meteor shower is also referred to as the Bootids since it appears to originate from between the still-recognized constellations of Bootes and Draco.