A physics experiment may have unexpectedly detected dark energy on Earth

“If it's true, it's a stunning discovery.” 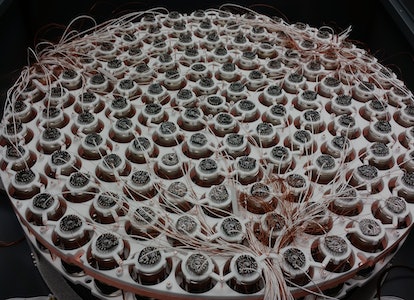 Hypothesized by physicists to drive the accelerating expansion of the universe, dark energy has never been directly observed or measured. Instead, scientists can only make inferences about it from its effects on the space and matter we can see.

Finding measurable hints of dark energy’s effects on distance objects — and the shape of space itself — is a major goal of major NASA missions, such as the upcoming Nancy Grace Roman Space Telescope.

But in a new paper published September 15 in the journal Physical Review D a group of cosmologists suggests researchers might not need to peer deep into the cosmos to make second-hand observations of dark energy — it may have been detected right here on Earth.

What’s new — In the paper, the researchers claim that hints of dark energy were detected at the Gran Sasso National Laboratory in Italy during an experiment designed to detect dark matter.

The team, comprised mostly of theorists, looked at data from the XENON1T, an experiment designed to detect rare interactions between hypothetical dark matter particles and components of the noble gas xenon held in a special detector.

The odds that dark energy has been detected directly are admittedly low, Jeremy Sakstein, assistant professor of theoretical physics at the University of Hawaii and one of the paper’s authors, tells Inverse.

“There are other explanations for this signal as well,” he says, and at the moment, “we don't know whether it's just a statistical anomaly.”

Statistically, there is a 5 percent chance the detection was an anomaly. The detection of the 2012 discovery Higgs Boson, by comparison, was much more certain — there was only a chance in about 3.5 million that detection was anomalous.

But if corroborated, the detection of dark energy in XENON1T would mean the first experimental verification of what is arguably the most powerful force shaping the evolution and fate of the entire cosmos.

“If it's true, it's a stunning discovery,” University of California, Berkeley astronomer Alexei Filippenko, who was not involved in the study, tells Inverse. “But a lot remains to be done to verify whether it's true.”

What is dark energy?

Physicists have known the universe is expanding for years, but in the late 1990s, observations made it clear that the universe was not just growing larger but doing so at an accelerating rate. That was a very strange thing to discover, Filippenko explains.

“Why it's a strange result is that since normal gravity is attractive, we would expect all the galaxies to be pulling on each other and slowing down the expansion of the universe,” Filippenko says. “Its expansion was a giant surprise.”

All the known stuff should be pulling in on the universe, in other words, not pushing outward. So astrophysicists dreamed up new stuff to explain the strange behavior: dark energy. Filling all of space, dark energy’s negative pressure is inflating the cosmos like a balloon.

Right now, it’s believed to be about 68 percent of the mass of the universe, though the ratio grows with the expansion of the universe. Dark energy seems to interact very little with gravity.

Around 27 percent of the mass is dark matter, which is unrelated to dark energy save for its elusiveness in detection (hence the dark). Dark matter may be objects we can’t easily detect or matter made out of exotic particles. Normal matter consisting of the remaining 5 percent. Both dark matter and normal matter interact with gravity.

“It's the dominant stuff of the universe, and we don’t know what it is! That’s kind of disturbing,” Filippenko says.

Much like dark matter, there are several theories of what dark energy is. Sakstein and his group looked at one particular hypothesis: chameleon particles, so named because they can adjust their properties to the local environment.

How they did it— In June of 2020, a XENON team reported their experiment had recorded an excessive number of particle interactions with electrons in the detector compared with their predictions.

Proposed explanations for the extra detections range from statistical anomalies to the detection of solar axions, a hypothetical type of dark matter particle that could be produced in the core of the Sun. This theory, however, contradicted observations of both the Sun and other stars.

But Sakstein and his colleagues, who weren’t involved in the original detection, took a look at the results and applied some outside-the-box thinking.

They propose that XENON1T may have incidentally detected dark energy “chameleon” particles, a hypothetical form of dark energy that could be created in the Sun and, under the conditions of the XENON1T experiment, interact with normal matter in much the same way as solar axions, but without contradicting observations of other stars.

Chameleon theories are just one of many frameworks for understanding dark energy, according to Sakstein. If he’s right and chameleons do explain the excess detections in XENON1T, it would rule out many other dark energy hypotheses and open the door for experimental work and predictions that are currently impossible. But it’s a big if.

What’s next — As a theorist, Sakstein says, “I'm used to having my theories ruled out pretty quickly.”

While he would love to have this hypothesis confirmed, the next step is to try and prove it wrong by looking for similar signs of chameleon dark energy detections in other experiments. In the paper, the researchers note the PandaX-4t experiment in China, and the U.S. Department of Energy’s LUX-Zeplin experiment in South Dakota as candidate chameleon catchers.

“The new and exciting thing is really that now we know we can look for things in one detector, we can look for corroborating evidence in other detectors and future detectors,” Sakstein says. “Maybe this works, maybe it doesn’t.”

Abstract: We explore the prospects for direct detection of dark energy by current and upcoming terrestrial dark matter direct detection experiments. If dark energy is driven by a new light degree of freedom coupled to matter and photons then dark energy quanta are predicted to be produced in the Sun. These quanta free-stream toward Earth where they can interact with Standard Model particles in the detection chambers of direct detection experiments, presenting the possibility that these experiments could be used to test dark energy. Screening mechanisms, which suppress fifth forces associated with new light particles, and are a necessary feature of many dark energy models, prevent production processes from occurring in the core of the Sun, and similarly, in the cores of red giant, horizontal branch, and white dwarf stars. Instead, the coupling of dark energy to photons leads to production in the strong magnetic field of the solar tachocline via a mechanism analogous to the Primakoff process. This then allows for detectable signals on Earth while evading the strong constraints that would typically result from stellar probes of new light particles. As an example, we examine whether the electron recoil excess recently reported by the XENON1T collaboration can be explained by chameleon-screened dark energy, and find that such a model is preferred over the background-only hypothesis at the 2.0σ level, in a large range of parameter space not excluded by stellar (or other) probes. This raises the tantalizing possibility that XENON1T may have achieved the first direct detection of dark energy. Finally, we study the prospects for confirming this scenario using planned future detectors such as XENONnT, PandaX-4T, and LUX-ZEPLIN.

More like this
Science
8.12.2022 12:30 PM
Astronomers pinpoint the source of a mysterious cosmic particle
By Kiona Smith
Science
8.13.2022 5:00 PM
Astronomers discovered the earliest known dark matter — and it's not behaving as predicted
By Jeff Nagle
Science
8.14.2022 7:00 PM
Do aliens exist? Jupiter’s moon Europa could hold the answer
By LAURENCE TOGNETTI and Universe Today
Related Tags
Share: