To get to space, you must go through the Panama Canal. 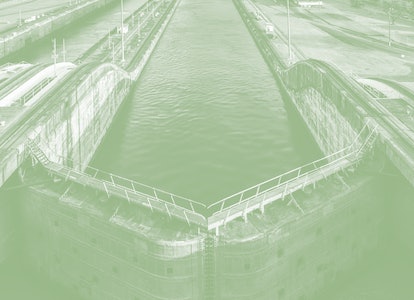 Once it’s safely deployed at its operational orbit, the James Webb Telescope will allow astronomers to peer further into the distant past of the universe than anyone has before.

But before the Webb telescope can take its place in the firmament and the future, it must face hazards more familiar a century ago than in the present, namely a lengthy sea voyage from Long Beach, California to its launch site at Kourou in French Guiana — with the risk of piracy thrown in for good measure.

When the James Webb Space Telescope launches in late October, it will head to space as one of the most sophisticated scientific instruments ever created. A technological marvel more than three decades in the making, it’s the crown jewel of 21st-century space astronomy.

While Webb Telescope is designed to scour the heavens, its road to space is very much terrestrial, with all the banal obstacles Earthly roads throw in its path.

Initially, the plan was to fly the telescope into the Cayenne Airport, the closest airport to the ELA-3 launch site near Kourou. Rolling it into a Lockheed C5 Galaxy cargo plane was the easy part. Rolling it to the launch site from the airport would be impossible. The bridges along the route weren’t strong enough to support the moving cargo. The 56-mile journey goes up the coast on roads paved into the sandy soil.

“The most basic of physics is in play there,” Mark Voyton, NASA’s integrated science instrument module manager for the Webb Telescope, tells Inverse.

So NASA had to get creative in sending its long-delayed, very expensive, giant, gold space telescope from So Cal to the launch site in French Guiana, the France-controlled territory on the northeastern coast of South America.

Sometime in the next few weeks, the Webb telescope will be carefully rolled onto a ship that will sail through the Panama Canal and navigate up the Kourou river, eventually delivering the space telescope within an hour’s drive to the launch site. The future of space science and exploration, for possibly decades, first must travel down a 51-mile canal completed in 1914 over a journey that takes more than 11 hours.

How you ship a space telescope by sea — A finely tuned instrument such as the Webb Telescope is not something one can tie to the deck of a container ship. NASA has created a special, environmentally controlled container for its journey, known as the Observatory Space Telescope Transporter for Air, Road, and Sea.

“It has everything the observatory needs to maintain its environmental safety,” Voyton says. “Temperature controls, humidity controls; there's the ability to make sure that all of our instruments are purged with dry air to keep them dry.”

And humidity and jostling by waves are only some of the hazards NASA has planned to mitigate during the Webb Telescope’s journey to space.

Voyton couldn’t tell me the exact timing and course of the voyage, a precaution given the concern that pirates or other would-be maleficent actors might target the $10 billion Webb Telescope for hijacking. “We've enlisted the services of the US transportation Command to assess the complete route and the likelihood that we would encounter any unsafe individuals, situations,” he says.

“The recommendations can span all the way up to, if necessary, having a naval escort out on the sea,” Voyton adds, though he cannot say what security options have been selected.

Unboxing a Space Telescope — Once the vessel carrying the Webb Telescope arrives and the instrument is carefully offloaded and transported to the launch site using a specially designed transport vehicle, Voyton’s team will begin work in earnest.

It takes 55 days to prepare the Webb Telescope for launch, he says, with the first month going toward testing all its electrical systems to make sure they are still functioning after the journey.

“We have a little bit of configuring work to do to put it in its final flight configuration,” Voyton says, after which they will take another two weeks to fuel the Webb with hydrazine and oxidizer.

The remaining time will be spent placing the Webb telescope on the Ariane 5 rocket.

Mark McCaughrean discusses the James Webb Space Telescope in 2018. It’s an excellent primer and use of your 22 minutes.

The space leg of the journey — Mark McCaughrean, an astronomer and member of the ESA science team for the telescope, has been involved with the project for 23 years.

McCaughrean’s not that worried about the predictable problems that could occur: “That anxiety is relatively low at this point because we've known about them for decades,” he tells Inverse. “The rocket is a thing that works 99 percent of the time.”

But it’s the unknown-unknowns, McCaughrean says, citing the late Donald Rumsfeld, that give him a little anxiety.

First, there could be further delays in the launch having nothing to do with the Webb Telescope.

The ESA is currently building its next generation of rocket, the Ariane 6, McCaughrean says, and since the Ariane 6 uses the same mobile launch platform as the Ariane 5, there is only one mobile platform available in Kourou at the moment.

“What that means is that we are in a strictly serial queue at the moment that there is one more launch to go before the JWST,” a French Military payload, he says. “If that launch slips, JWST will slip.”

Once successfully launched into space, the Webb Telescope will also immediately face new hurdles before it can begin doing any actual science, including deploying medium gain antennas for communicating with Earth and the solar panels so the battery isn’t drained. “These are minutes after the launch,” McCaughrean says.

Next, the Webb Telescope faces a weeks-long journey to Lagrangian point two (L2), 1.5 million kilometers behind the Earth as seen from the Sun, a distance and location necessary, McCaughrean says, to cool the telescope to just 50 degrees above absolute zero.

“If it was orbiting the Earth because the Earth is too close, too hot, the telescope would be hot and we'd never be able to do Infrared Astronomy better than from the ground,” he says.

The Webb Telescope also carries a large, flopping sunshade to aid in keeping the instrumentation cool, “layers and layers of Mylar, which have to come out and be stretched out and tensioned,” McCaughrean says. It’s an alarmingly analog process utilizing strings and pulleys, he says, another throwback to another time, “a bit like being on a sailing ship.”

The future for the Webb Telescope — If all goes well, it will mean the fulfillment of a project many of McCaughrean’s peers have spent their entire careers on and an untold amount of scientific data that will make the careers of the next generation of researchers.

“The enthusiasm in the community from young people who were just kids when we started is remarkable,” McCaughrean says. “I mean, it's very gratifying to see and slightly scary, right? It's like seeing your own kids grow up.”