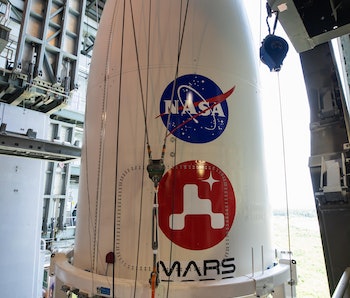 With only one week left until the launch window opens for NASA's Perseverance rover, the car-sized robot is going through final prep for its long journey to Mars.

NASA released a video this week that shows Perseverance's last steps toward the launch pad, as it gets packed up and ready to board the rocket to the Red Planet.

The video shows Perseverance's journey that began in February as the rover made its way to the NASA Kennedy Space Center in Cape Canaveral, Florida on February 12. From there, the rover has been going through final tests before it gets approved for launch.

On Wednesday, a video was released of it being packed up in a fairing nose cone which will be maneuvered into place on top of the Atlas V rocket that will launch Perseverance to Mars as soon as July 30.

This was another important milestone in the rover's journey to the Red Planet, clearing its Flight Readiness Review.

"We're pleased to be passing another milestone with the completion of the Flight Readiness Review," Matt Wallace, deputy project manager for the mission at NASA's Jet Propulsion Laboratory (JPL) in Southern California, said in a statement. "But we'll keep our heads down through the final prelaunch activities and the opening of the launch window next week, until we're certain this spacecraft is safely on its way. Mars is a tough customer, and we don't take anything for granted."

Perseverance has one more major review to complete before its launch, aptly named the Launch Readiness Review which will take place on Monday, July 27. During this final review, the team of engineers behind the mission will do one final checkup before the mission receives final approval to go ahead with the launch.

"NASA can't wait to take the next steps on the surface of Mars with Perseverance," Lori Glaze, director of the Planetary Science Division at NASA Headquarters in Washington, said in a statement. "The science and technology of this mission are going to help us address major questions about the geologic and astrobiologic history of Mars that we've been working on for decades, and we're excited to take the whole world with us on this journey."

The Martian rover is scheduled for a launch window that opens on Thursday, July 30 at 7:50 a.m. Eastern.

Once it lands on Mars by February, 2021, the rover is tasked with looking for signs of habitability on the Martian surface and past microbial life, as well as collecting samples of rocks and soil and setting them aside for a future mission to return them back to Earth.

The mission will also test out conditions for possible human exploration of Mars by trialing a method of producing oxygen from the Martian atmosphere, characterizing environmental conditions such as water and dust on Mars, and looking for resources.

The rover is supposed to land in the Jezero crater — an area of Mars that has been identified by scientists as a potential hotbed of evidence for life on the planet. It will collect various samples from the Martian surface and soil, storing them for a future mission to return to Earth for analysis.

Perseverance rover is set to spend at least one Martian year on the planet — the equivalent of 687 days on Earth.