Perseverance: Meet the driver who navigates the Mars rover

“You go to work on Mars every day.” 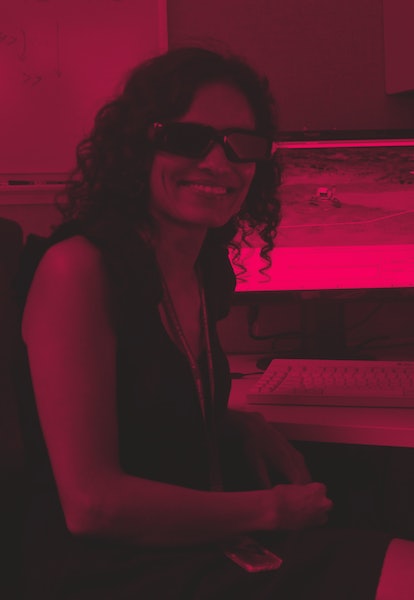 The windows at NASA’s Jet Propulsion Laboratory’s mission control room have all been covered, and there are three clocks on the wall each for a different timezone: GMT, Pacific, and local mean solar time — or NASA’s long-form name for Mars time.

Vandi Verma guides Inverse through her “evening,” where she arrives at her workstation, puts on her 3D glasses, and is transported to a different world, cruising along the Martian terrain and exploring its surface.

“When you’re driving, you’re so immersed in an environment,” Verma tells Inverse. “I don’t know if there are rocks on Earth that I know as well as I know some of the rocks on Mars.”

Verma is the chief engineer for Robotic Operations for NASA’s Perseverance rover, and one of her many tasks is driving the rover on Mars. During her 10-hour shift, Verma operates on Mars from the perspective of the rover, working on Martian time and seeing the Red Planet through the robot’s eyes.

“When I look at one of the rover’s selfies, I can look at the back of the images and know the tracks of the drive I did,” Verma says.

Verma has been driving rovers on Mars since 2008, living between two different worlds while seeing the missions evolve over time.

Although the task can often be grueling — operating on the time zone of a different planet ends up taking a toll on the body — the roboticist still finds joy in her drives and in seeing more of the Red Planet.

The road to Mars — Verma was born and raised in Halwara, India. After graduating from Punjab Engineering College in Chandigarh, India with a bachelor of science in electrical engineering, she went on to pursue her Ph.D. in robotics at Carnegie Mellon University.

Verma started working with NASA in 2004 before graduation, while she was still completing her thesis.

“I was in grad school when Sojourner (NASA’s first rover on Mars) was developed,” Verma says. “In fact, I never thought I'd get to drive them.”

But her thesis, titled “Tractable Particle Filters for Robot Fault Diagnosis,” grabbed the attention of the robotics engineers at NASA. Her winning a competition in college for her design of a robot capable of navigating through a maze and collecting balloons didn’t hurt either.

Verma joined the rover team in 2008, working on the Spirit, Opportunity, and Curiosity rovers, the latter of which is still roaming Mars today.

She also worked on developing the flight simulation software systems used by Perseverance and making the rover more autonomous than its predecessors.

Unlike rovers before it, Perseverance is able to drive further during a given period of time, and is better suited to identify interesting rocks for further exploration, rather than relying on the mission team on the ground. But this Martian robot still needs guidance from the team down on Earth for more complex tasks.

Driving on another planet

All in all, there have been about 12 other rover drivers.

The task is very similar to playing a virtual reality video game, if that virtual reality was in fact the actual reality of another planet, and if the task at hand was answering the very impending question of whether life exists beyond Earth. So you know, sort of the same thing.

But to drive a rover on Mars, rover drivers must first adjust to the Martian schedule.

So for Verma, she begins each workday about 40 minutes later than the day before.

Most of the time, Verma’s shifts begin late at night while it’s still daytime on Mars, so all windows must be covered as not to confuse the two timezones. If you’re operating on Mars time, you have to pretend you’re on Mars.

“I do find it is taxing to the human body because we have rhythms, and now you're changing it,” Verma says.

The team receives training on how to best adjust to this working schedule, getting used to things like it being dinner time while the Sun is still out.

For Verma, a typical workday involves a 10-hour shift where she writes the commands for the rover to follow and beams them up to Mars through the Deep Space Network, NASA’s interplanetary communications network.

The network is made up of three deep-space communications facilities which use radio frequency transmissions that travel through large antenna systems with specialized receivers.

Because of the distance between Earth and Mars, it takes about 20 minutes for the commands to reach the rover.

“And so, when the robot is finished doing its job, right away, we are taking that data, responding to it and sending instructions back,” Verma says.

Aside from adjusting to the Martian timezone, Verma also works as though she’s on another planet, literally. The team use images captured by the Perseverance rover to create a three-dimensional world, and use 3D glasses to immerse themselves in that world.

“You’re literally looking from the rover’s perspective,” Verma says. “When you put on the 3D goggles, something that just looks benign and flat will actually appear to have all these depressions and undulations.”

After a while, Verma developed an intimate relationship with the rover.

“It is a machine but there's also an aspect of intelligence that we help design, so I feel like you're interacting with this sophisticated thing that in some ways is more intelligent than any one individual,” Verma says. “There are so many people on Earth who worked on it, and they all have different expertise so it’s a combined intelligence.”

Over the years, Verma has also gotten overly familiar with Mars where she can now recognize some of the planet’s features better than those of Earth. Naturally, there is a disconnect between the two worlds, going from a simulated environment of another world and later coming back to Earth, where it’s a different timezone entirely.

“You've been immersed, you’ve been there for hours and then you walk out and it's a completely different time of day,” Verma says. “And then suddenly you’re brought back into a world that’s different.”

“You go to work on Mars every day.”