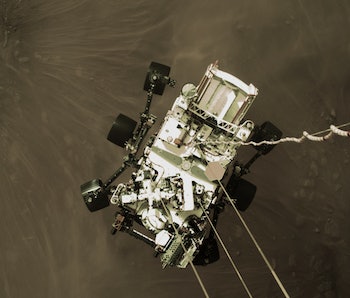 The first batch of images from the Mars rover Perseverance are in — and they already hint at the exciting journey for the newly-arrived rover.

Not least of which is because there’s now a movie, with sound, from another planet.

The rover arrived on Mars on Thursday, February 18, after nearly seven months in space. It faced a descent over treacherous terrain, and endured “seven minutes of terror,” during which NASA had scant communication with the rover as it plunged into the thin atmosphere of the Red Planet.

But at 3:55 p.m. Eastern, the Mars 2020 touched down successfully. Two preliminary images from the rover were released on Thursday, which reveal the rocky terrain it landed upon — and is now set to explore.

On Friday, NASA held a press conference to check in on the rover's first 24 hours on Mars.

On Friday, NASA also released a new batch of images from the rover and landing. The pictures include a vertigo-inducing descent image taken from above the rover, a Mars Reconnaissance Orbiter image of Perseverance as it made its way down, high-resolution versions of the initial rover images, and an image taken near the wheel of the rover.

This last image appears to show rocks pockmarked with holes, similar to pumice.

Those rocks are geologically interesting. The Mars 2020 team isn't sure if they were formed by sedimentary processes — in which debris accumulates into rocks — or volcanic processes, like pumice.

"Both of those will be equally exciting to the team, so we can’t wait to find out," Katie Stack Morgan, deputy project scientist on Perseverance, said Friday.

Friday's batch of images reveal the surrounding area within Jezero Crater, which has previously been seen only via images gathered by Mars orbiters. Jezero was likely formed by a meteorite crash, and a nearby ancient river then spilled over into it, depositing clay and other organic materials which could reveal the presence of past life on Mars.

"Free of boulders, free of slopes, free of cliffs."

So how treacherous could the terrain have been?

“This was always going to be a challenging site to land in, but there is no better validation of Perseverance's Terrain Relative Navigation system than the fact that it did its job perfectly yesterday,” Paul Byrne, an associate professor of planetary science at North Carolina State University who is not involved with the mission, tells Inverse.

In fact, Perseverance's good work could open the door to future landings on far rougher terrain, like that of Jupiter’s moon Europa, for example, which is covered with both regions of jagged ice spikes and areas with a quicksand-like surface consistency.

“Some of those parts of planetary surfaces once thought inaccessible might now be fair game,” Byrne says.

What's next — There are a few more boxes the rover needs to check before it can begin its mission in earnest.

First, it will check and calibrate hardware to make sure it works properly, and update software to optimize the craft for surface operations.

After that comes some truly exciting things to look forward to: In addition to its ambitious plan to return samples of Mars to Earth, the rover will also deploy the first helicopter on another world — called Ingenuity — and explore ancient waterways.

The craft also has an experiment on it, known as the Mars Oxygen In-Situ Resource Utilization Experiment (MOXIE), which will use resources on Mars to attempt to make oxygen. This effort is vital for future exploration efforts, whether to provide future human explorers to Mars with breathable air, water, or rocket fuel.