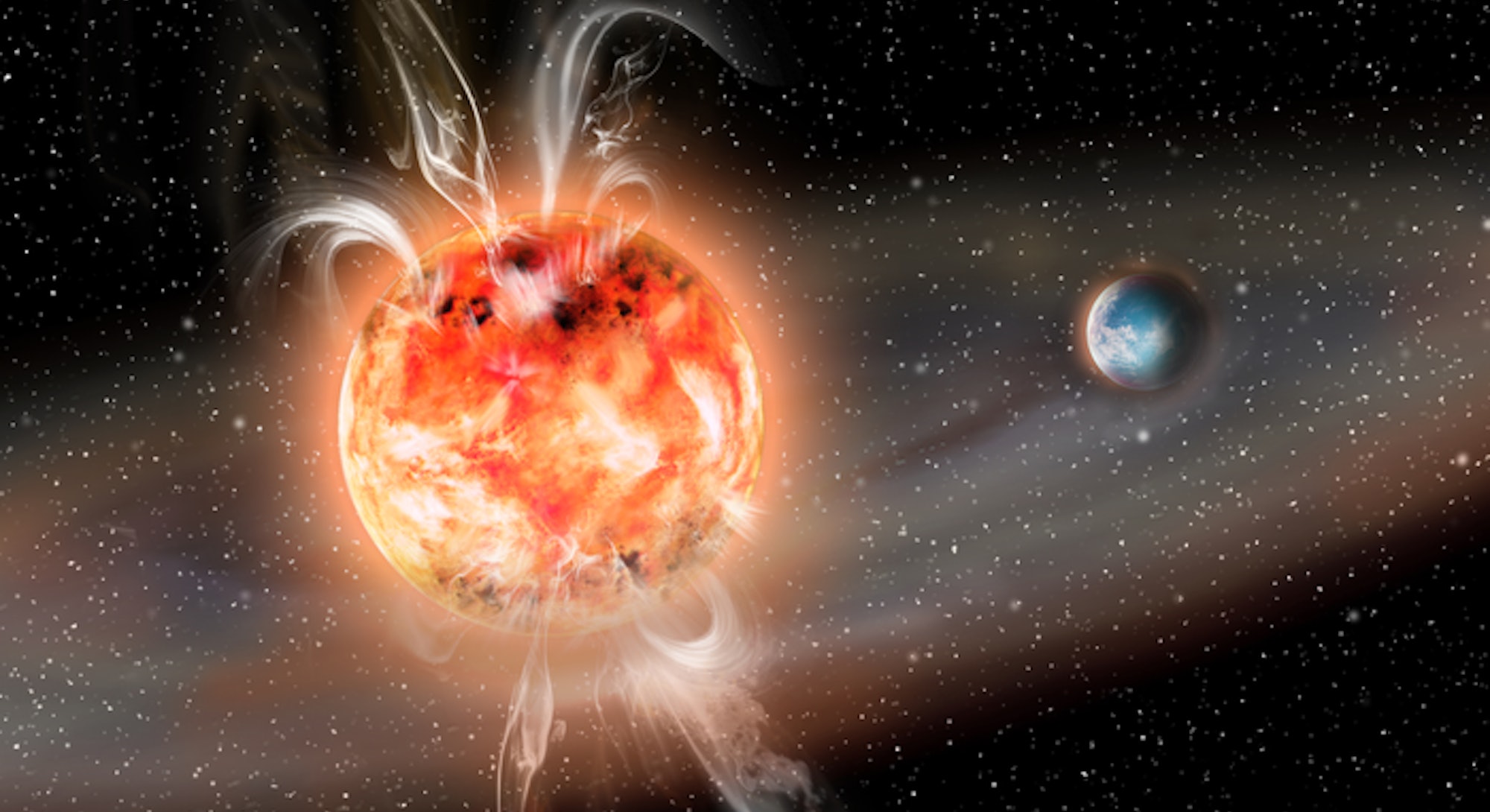 Young, hot stars are often underestimated. In the search for life in the cosmos, astronomers have previously disregarded red dwarf stars as having inhospitable star systems whereby none of their orbiting exoplanets could possibly host life.

But a new study suggests that superflares — or extreme radiation bursts from young, small stars — pose little threat to the orbiting planets, therefore increasing the potential for their habitability.

The study was published in the Monthly Notices of the Royal Astronomical Society.

Red dwarf stars are the most common type of star in the universe, outnumbering stars like the Sun by five times. They have a lower temperature and mass than the Sun but are way more active.

But the researchers behind the new study wanted to examine whether superflares from red dwarfs were, in fact, that damaging. To do so, they looked at where the superflares were coming from.

The researchers went through the entire archive of observations obtained by NASA's Transiting Exoplanet Survey Satellite, a mission designed to search for exoplanets launched in 2018. They searched for stars that show large flareups by processing the light curve of over 3,000 red dwarf stars.

Their observations found that huge flares are launched near the poles of red dwarf stars, unlike the Sun, whose flares launch from the equator. This has major implications for the planets that orbit those stars.

“Exoplanets that orbit in the same plane as the equator of the star, like the planets in our own solar system, could therefore be largely protected from such superflares, as these are directed upwards or downwards out of the exoplanet system,” Ekaterina Ilin, a Ph.D. student at the Leibniz Institute for Astrophysics Potsdam and lead author of the study, said in a statement.

“This could improve the prospects for the habitability of exoplanets around small host stars, which would otherwise be much more endangered by the energetic radiation and particles associated with flares compared to planets in the solar system,” she adds.

HERE’S THE BACKGROUND — Astronomers have found plenty of exoplanets orbiting around red dwarfs, but their habitability has always remained a question mark.

The closest example to home is Proxima Centauri, a red dwarf and the closest star to the Sun. Two planets have been found orbiting around Proxima Centauri. One of them is close to the size of Earth and orbits within the star’s habitable zone, the distance from a star where a planet can host liquid water on its surface.

Proxima Centauri often shoots out large superflares, leaving scientists wondering whether or not its orbiting planets could support life.

There are other issues concerning red dwarf stars that may affect their habitability.

The planets that orbit around red dwarfs tend to be tidally locked, meaning that one side of the planet is constantly facing the star while the other is shrouded in darkness. Additionally, gas giants such as Jupiter rarely form around red dwarfs, and Jupiter’s gravitational field has helped our Solar System ward off incoming asteroids that could impact a planet.

WHAT’S NEXT — NASA is preparing to launch the James Webb Space Telescope (JWST) in late October, and some of its prime targets will be red dwarf stars.

The telescope will be able to analyze the atmospheres of the stars’ orbiting exoplanets in unprecedented detail, possibly resolving the issue of their habitability. JWST will also be able to monitor red dwarfs like Proxima Centauri and the promising TRAPPIST-1 system to see how their flares might affect their planets.

Abstract: White-light flares are magnetically driven localized brightenings on the surfaces of stars. Their temporal, spectral, and statistical properties present a treasury of physical information about stellar magnetic fields. The spatial distributions of magnetic spots and associated flaring regions help constrain dynamo theories. Moreover, flares are thought to crucially affect the habitability of exoplanets that orbit these stars. Measuring the location of flares on stars other than the Sun is challenging due to the lack of spatial resolution. Here we present four fully convective stars observed with the Transiting Exoplanet Survey Satellite (TESS) that displayed large, long-duration flares in white-light which were modulated in brightness by the stars’ fast rotation. This allowed us to determine the loci of these flares directly from the light curves. All four flares occurred at latitudes between 55○ and 81○, far higher than typical solar flare latitudes. Our findings are evidence that strong magnetic fields tend to emerge close to the stellar rotational poles for fully convective stars, and suggest that the impact of flares on the habitability of exoplanets around small stars could be weaker than previously thought.