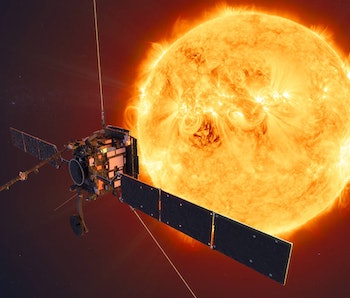 NASA's new Solar Orbiter is set to transform what we know about the Sun — and help protect the technology humans depend on every day in the process.

On February 9, NASA and the European Space Agency (ESA) are set to launch a mission to the Sun that will go where no other spacecraft has gone before. It will answer some of the unresolved mysteries of heliophysics — that's the science of the Sun — and discover how the Sun controls the space environment around it.

The Solar Orbiter, worth $1.5 billion, will travel toward the Sun to measure its magnetic fields — the streams of particles and plasma ejected from the star. It will also give scientists their first good look at the Sun’s poles.

“It’s a golden age for solar physics right now,” Anne Pacros, Solar Orbiter Mission and Payload Manager at ESA, said during a press call about the launch this week. “We’ve had to wait that long in order to get the technology right, and now is definitely the time to study solar physics.”

The Solar Orbiter will travel in an elliptical orbit around the Sun, completing one orbit every 168 days.

Here's a timeline of the mission:

December, 2020: Solar Orbiter makes its first flyby of Venus. It will make several more throughout its mission.

November, 2021: Initial cruise phase of the mission ends. Orbiter will also complete its only planned flyby of Earth.

2022: The Solar Orbiter has its first close pass of the Sun — distance of about 31 million miles from the Sun.

Extended mission: If extended, the Solar Orbiter could reach up to 33 degrees latitude to the solar equator — providing the most-direct view of the Sun's poles currently possible.

During the close encounters, the spacecraft will essentially be staring down directly at the Sun’s magnetic poles, providing a new perspective on an area which scientists believe may be responsible for the eruption of solar wind.

To get a sense of what the spacecraft might observe, the team behind the orbiter did a prospective 3D print of the Sun’s magnetic field. They found that the poles look completely different when viewed from the top than when they are viewed from the equator. They predict that the orbiter’s view will likely be of two enormous, dark coronal holes.

“Most researchers believe the key to understanding the intensity of the next solar cycle is seeing these poles flip polarity,” Chris St. Cyr, former NASA project scientist for the mission at Goddard, said during the press call.

A solar cycle occurs every 11 years or so. It marks a change in the Sun’s magnetic activity, when the star’s South and North poles switch places. Although it is not clear when in the solar cycle the orbiter will reach the Sun, the team is optimistic that they will still be able to observe something interesting happening at the polar region.

“The Sun and its corona are pretty interesting no matter what time in the solar cycle, so we will take whatever the Sun gives us,” Cyr said.

Here's a full break down of all the scientific instruments the spacecraft carries on its journey:

The particle detector will measure the composition of the particles of energy that are emitted by the Sun, as well as their timing and distribution functions.

The magnetometer will help scientists study how the Sun's magnetic field connects to outer space, and how it changes over the duration of the solar cycle by measuring the heliospheric magnetic field.

As the name suggests, the main purpose of this instrument is to analyze solar wind by measuring its ions and electrons.

This instrument will capture the layers of atmosphere above the photosphere, or the outer shell, to provide a better picture of the area between the solar surface and the outer corona which shapes the interplanetary medium.

Unlike the other instruments, this one is designed to investigate the solar interior by measuring the photospheric vector magnetic field.

Designed to investigate mass ejections of the corona, this instrument will image the disturbances in the solar wind.

In order to characterize the properties of plasma in the Sun's corona, this instrument will perform extreme ultraviolet imaging spectroscopy of the solar on-disc corona.

This instrument will be able to provide scientists with the timing, location, and intensity of the electrons and plasma being emitted from the Sun in the form of flares or microflares.

But before it can put any of these scientific instruments to use, it has to survive the trip.

The Solar Orbiter is designed to withstand a distance of just 0.27 AU from the Sun's surface — almost three-quarters of the total distance from Earth to the Sun.

That may seem far — it is still 26 million miles — but this is no mean feat. Temperatures at that distance can reach some 1,000 degrees Fahrenheit — 13 times what any satellite in Earth orbit could experience.

“It’s like being in a pizza oven, so you have to make sure that you don’t burn the instruments,” Günther Hasinger, director of ESA’s science program, told Space Flight Now.

To make its mission possible, scientists developed a special black coating for the orbiter that will help it stand the heat. Loaded with 10 scientific instruments — all of which are highly sensitive to heat — keeping it cool is crucial to the mission's success.

Shockingly, the coating was developed using a pigment based on charred bones.

“Firstly it had to keep the same colour during years of exposure to intense solar flux, including high ultraviolet radiation — the mission team would have loved a white coating, to reflect back more solar energy, but testing showed it would darken unacceptably over time. So we settled on black, to keep its thermo-optical properties stable over the mission lifetime," ESA materials engineer Andrew Norman said in a statement.

“Secondly it had to be electrically conductive, to prevent any build-up of static from interaction with the solar wind — which might do damage to the spacecraft by discharging," he said.

"Finally there could be no outgassing or shedding of particles, which might endanger the mission’s instrument lenses, mirrors and sensitive surfaces.”

The resulting Solar Black coating manages to resolve these problems — it even now coats one of the craft's instruments, a Beryllium X-ray filter which is part of the craft's Spectrometer/Telescope for Imaging X-rays, or STIX, located in direct view of the Sun.

Solar wind matters to us here on Earth. As much as the Sun nurtures life on our planet, the star can also be quite destructive. Scientists have been observing our host star for centuries, but we’ve barely scratched the boiling hot surface in terms of what we know about solar wind and the violence it can wreak on our own planet. But what little we do know is not encouraging.

Solar storms happen relatively frequently — Earth's atmosphere helps protect our planet from their effects, but sometimes, these storms are so powerful that they can break down that protective barrier.

One such storm happened on September 2, 1859 when the Sun released a stream of charged particles in the form of solar wind. As the gust blew out into the cosmos, it hit the Earth’s atmosphere, causing the worst solar storm ever recorded in history.

If a storm of that magnitude were to take place today, it could cause a worldwide blackout and catastrophically disrupt the communication technologies we depend on. So the stakes are high.

NASA missions to the Sun

The Solar Orbiter joins another spacecraft currently orbiting around the Sun. NASA’s Solar Parker Probe, which launched in August, 2018, is designed to dive into the Sun’s atmosphere and collect data on solar wind and the star’s magnetic field.

Already, the probe has offered unprecedented insight into our host star. As Inverse reported last week, it has sent back the most-detailed images of our Sun's roiling surface ever taken (they are stunning). And in December 2019, scientists announced a set of discoveries — and new questions — based on the initial analysis of the first data sent back by the probe. Among the key findings: The source of the solar wind.

Once the solar fleet wraps up their respective missions, researchers expect to have more questions than answers, as the Sun will likely reveal more mysteries behind its mechanisms.

“This is the beginning of transformational science that we can make by studying our star,” Pacros said. “There’s so much science still yet to do as we will find more phenomenon to have to explain.”

On February 7, you can watch the Solar Orbiter launch into space live by tuning in here.