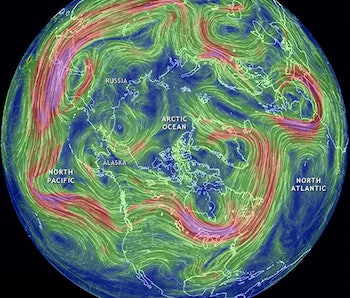 We're more than a month into spring, but winter just doesn't want to let go. For much of the eastern United States, it's time for another polar vortex — because 2020 loves surprises.

The vortex is expected to descend early Friday and break records for unseasonable cold by Saturday. By next week, the weather will look a bit more typical. Scientists expect the unusual spell to be cleared up by mid-month.

You may have questions about how we can possibly be due for another cold snap, or what we did to deserve this kind of treatment from the universe. That's normal. Inverse is here to help.

Are you serious? — Yes, this is happening, and it could be record-setting.

Around 75 million people in the U.S. will experience below-freezing temperatures, NBC News reports. Cold is likely to hit parts of the Northeast, Mid-Atlantic, Ohio Valley, and Midwest. The Northeast region and Eastern seaboard may also see wind gusts up to 40 miles per hour.

The amount of snow will vary by region — some cities might get a few flakes, but northern New England could see up to a foot of snow. That would break previous records for snow in May.

If you're in an area that's going to get snow, it won't be the light and fluffy stuff. The mid-spring polar vortex is expected to bring wet and heavy precipitation across the eastern US, reaching into the midwest, northeastern states, and potentially as far south as North Carolina.

But I thought it was spring — Prince warned us that "sometimes it snows in April," but May? Really?

Still, it's true: While outlier events, polar vortexes can still happen this time of year. And with a polar vortex, comes snow.

Springtime snow has hit the northeastern US before: In May 1977, parts of Massachusetts and Connecticut were hit by a snowstorm — and Connecticut received 20 inches of snow. The people of Caribou, Maine, have encountered eight May snowfalls in the past two and a half decades.

From the look of what's to come, this could put a damper on outdoor Mother's Day plans:

What exactly is a polar vortex? — Polar vortices are a wild scientific phenomenon — and some research suggests that climate change is causing the breakdown of the polar vortex to become more common.

The tropospheric polar vortex is lower, and at its edge is the polar jet stream — fast-flowing air that separates air masses.

When parts of a polar jet stream break, or move south, we get the notable cold snaps you may have heard of before.

Some studies indicate that the polar jet stream has weakened over the past three decades — which means that the cold surface air from high latitudes increasingly makes it down to middle latitudes. There are also some signs that the Arctic polar vortex, driven by climate change, is also weakening and shifting.

Right, haven't I encountered these before? — Yes, most recently, the US experienced a polar vortex last January and February. That one was serious: The weather event set record low temperatures, took 22 lives, sent dozens more to the hospital with frostbite and other cold-related conditions.

Is this the last snow of the year? — Good question. We can't say for sure, but climate change seems to be making the jet meandering, or "weirding," phenomenon worse. It's possible that next year, we will see a similar cold snap in May.

If nothing else, this weekend will give people one more reason to stay inside.