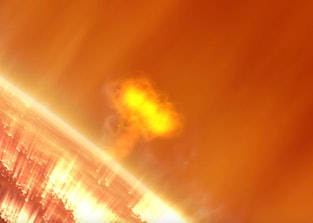 Our Sun is very active. At some point during its current 11-year-cycle, the Sun will eject boiling-hot plasma, in the form of solar flares, across the Solar System.

These solar storms can have devastating effects on orbiting spacecraft, astronauts, and even the electrical field we have down on Earth. And unlike storms on Earth, the ones that take place on the Sun have been impossible to forecast.

An upcoming NASA mission intends to give humans the information to better predict the violent radiation storms caused by the sun.

The Sun Radio Interferometer Space Experiment (SunRISE) is a very large radio telescope composed of six, miniature satellites known as CubeSats. The telescope will launch into space and study how the Sun releases these massive solar storms into outer space. This will help scientists understand how radiation from the Sun affects the space environment that astronauts through which astronauts travel.

The space agency has designated $62.6 million to design, construct and launch the telescope by July, 2023, NASA announced this week.

"We are so pleased to add a new mission to our fleet of spacecraft that help us better understand the Sun, as well as how our star influences the space environment between planets," Nicky Fox, director of NASA's Heliophysics Division, said in a statement. "The more we know about how the Sun erupts with space weather events, the more we can mitigate their effects on spacecraft and astronauts.”

Although the effects of solar radiation on space travel are not fully understood just yet, scientists are working towards figuring out how it affects the health of astronauts. What we know so far is that space radiation pierces through molecules of DNA, altering or permanently damaging them, according to NASA.

Some of the major health problems associated with exposure to radiation include an increased risk of cancer, changes in motor function and behavior, neurological disorders, and even death.

Therefore, being able to predict when these solar storms take place could potentially protect astronauts from fatal consequences as space agencies set their sights on longer-duration missions to the Moon and Mars.

Down on Earth, we're not entirely protected from these solar storms either. When these solar flares reach Earth, they penetrate through Earth's protective layer of the atmosphere, known as the magnetosphere, and wreak havoc on our electric equipment and power grids.

On August 7, 1972, a massive solar storm erupted from the Sun's surface, disrupting radio waves, telecommunication networks, and power systems by triggering an intense magnetic storm on Earth. So, imagine not being able to connect to your WiFi network, or possibly losing your phone connection for a day or two.

SunRise’s six solar-powered satellites — "about the size of a toaster oven" to use the wording in a NASA statement — will observe radio images of low-frequency emission from activity taking place above the Sun’s surface, an area known as the solar corona.

These radio waves can’t be observed from Earth due to interference from Earth’s upper atmosphere, the ionosphere, which essentially blocks them. Therefore, the CubeSats will fly above the ionosphere at around 22,000 miles from Earth, and within six miles of each other.

The radio telescope will then transmit the images down to NASA’s Deep Space Network. Using the data from SunRise, scientists will create 3D maps that will enable them to pinpoint exactly where these giant bubbles of plasma emerge from on the Sun, and how they evolve before they are ejected into space.

“We can see a solar flare start, and a coronal mass ejection start lifting off from the sun, but we don’t know if it is going to produce high energy particle radiation, and we don’t know if that high energy particle radiation is going to reach Earth,” Justin Kasper, professor of climate and space sciences and engineering at the University of Michigan, and lead researcher on the mission, said in a statement.

“One reason why is we can’t see the particles being accelerated. We just see them when they arrive at the spacecraft, which isn’t much of a warning.”

SunRise can help scientists understand why these giant jets of radiation form in the first place, and how they accelerate before shooting off into space.

“Knowing which part of a coronal mass ejection is responsible for producing the particle radiation will help us understand how the acceleration happens,” Kasper said. “It could also result in a unique warning system for whether an event will both produce radiation and release that radiation towards Earth or spacefaring astronauts.”

NASA and the European Space Agency (ESA) recently launched another mission to the Sun, the Solar Orbiter, in order to help give a better understanding of solar wind and the Sun's magnetic field. Together with NASA's Parker Solar Probe, which launched in August, 2018, as well as SunRise, we are sure to get an unprecedented look at our host star and unlock some of its boiling hot mysteries.