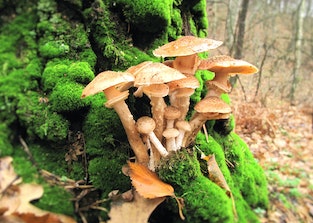 9 mushroom uses: Surprising uses for the fungus that improve your life

Mushrooms may make a nice risotto or send you on a life-changing psychedelic experience, but they have some other, incredible abilities.

These natural powerhouses already shape how we eat — but fungi could also change how we dress, how we look after our health, and even how we take care of our dead.

Here are nine innovative ways humans are adapting mushrooms to benefit our future.

Ethanol fuel is most commonly used as an additive in gasoline, and it is usually made from grains like corn. But mushrooms may also have the power to fuel our car engines and more, too.

A 2017 study in the journal Biotechnology for Biofuels found that the crushed remains of millet and sorghum mushrooms, which are typically used to feed edible Oyster mushrooms, can essentially be recycled and turned into fuel.

This potent mix of mushrooms, which would otherwise be wasted, has the “potential to be an industrially useful substrate for producing second-generation bioethanol,” the authors write.

Tiny little fungi grow on the roots of plants, forming symbiotic relationships with their hosts known as mycorrhizae. The fungi help plant roots take up the water and nutrients they need, making them vital to plant growth — and some may be better at it than others.

Certain types of mycorrhizae grows healthier and more abundant crops, according to a report from the University of Wisconsin.

Mycorrhizae can also help plants resist disease, and enable plants to withstand periods of drought or food scarcity. As a result, fungi may offer a natural boost for our crops in the face of threats from climate change, and could decrease the need for artificial fertilizers.

When used as a topical treatment, mushrooms can be a natural supplement to skincare. Certain mushrooms have natural properties that may improve human skin conditions, including acne, redness, and eczema, Dr. Gary Goldfaden told Women’s Health in a 2019 interview.

The reason why mushrooms may benefit our beauty regimen is because they contain antioxidants and vitamin D, both of which "work to protect the skin against environmental stresses, discoloration and fine lines," Goldfaden said.

But beyond aesthetics, mushrooms may also help treat more serious skin conditions, too.

A 2016 review on the uses of mushrooms in medicine, published in the journal Studies in Mycology, homed in on certain mushrooms' potential anti-inflammatory and antibacterial properties. One fungus the authors single out is the pleuromutilin-producing mushroom Pleurotus mutilus. Pleuromutilin is the basis for an approved antibiotic treatment for impetigo, an unpleasant and contagious skin condition characterized by blisters, a rash, and inflammation.

Rather than chow down on mushrooms, you can drink up. Mushroom tea is thought to have a number of health benefits, although these are disputed among the scientific community.

There are three main mushrooms used in tea:

Chaga: According to rodent studies, these fungi may boost the immune system and even destroy cancer cells. The mushroom may also reduce blood sugar, the research suggests. These studies have yet to be replicated in humans, however.

Lion’s mane: A 2016 mouse study published in the Journal of Biomedical Sciences suggests consuming the mushroom may prevent neuron damage related to Alzheimer's disease. have brain benefits, according to studies in rodents. Another 2009 study done in older human adults suggests the mushroom improves cognitive ability in aging. And a 2010 study in a small sample of post-menopausal women suggests the mushroom could reduce symptoms of anxiety and depression, too.

Reishi: A 2004 study involving just 10 people saw some potential heart health benefits by way of blood antioxidants — but a follow-up study did not confirm the results. There is also preliminary evidence to suggest reishi mushrooms contain compounds that may help to regulate blood sugar and cholesterol levels, however a small 2004 study in The British Journal of Nutrition found no significant evidence that the mushrooms have this effect in humans.

Several companies have gotten into the cruelty-free fashion game thanks to mushrooms, making vegan leather derived from fungi.

Bolt Threads, a sustainable fashion fabric brand, uses mycelium, or mushroom tissue, to grow networks of strong fibers. The fibers weave together to create a mat of material that closely resembles a sheet of leather, Fast Company reported in 2018.

Aside from being cruelty free, mushroom “leather” doesn’t decay the same way animal-based leather does. As a result, it lasts longer than typical leather and doesn't require the same chemical-heavy tanning processes to keep it looking and feeling soft and supple.

Because mushrooms contain chemical compounds that may effect the immune system, they could point researchers to new drugs to fight cancer, reports the United States' National Cancer Institute.

Turkey tail, a mushroom shaped like its namesake, is used in traditional Chinese medicine to treat lung disease, and in Japan it is also used as an immune system booster alongside more conventional cancer treatment.

These mushrooms contain polysaccharides, which are thought to be responsible for their health benefits. So far, these chemicals have been studied as a supplementary treatment in people diagnosed with breast cancer, colorectal cancer, and lung cancer, the Institute reports.

There is some evidence that the reishi mushrooms may slow or even prevent hair loss. Reishi inhibits the hormone dihydrotestosterone, which spurs hair loss. A 2005 study in rats tested reishi and 18 other mushroom extracts on hormone activity. The findings suggest reishi may have the most effect on hormone activity linked to hair loss in humans, hinting that the mushroom could effectively stop baldness in its tracks.

At the same time, the data suggest reishi mushroom may also increase hair growth, by way of making your scalp healthier. As a result, reishi mushrooms could one day form the basis of a treatment for baldness.

If it sounds like a fairytale, living in a house made of mushrooms isn’t actually all that far-fetched. The technology already exists to turn mushrooms into brick.

Growing these bricks involves mixing chopped-up mycelium and other materials, like corn husks or sawdust, and placing them in a mold, as BBC reported in 2014. Depending on what you feed the fungi, the bricks can have different properties.

The end result appears to be as strong as concrete. Mushroom bricks also present a novel way of disposing of waste byproducts from farming, like corn husks, and cutting back on climate change-contributing food waste.

When the inevitable occurs, you can go out the natural way with a mushroom burial suit.

Korean designer Jae Rhim Lee designed the suit to enable mushrooms to clear the body of toxins after burial. That may prevent the toxic chemicals and heavy metals we all contain from seeping into the earth as we decompose.

It’s a darkly poetic idea, but there is serious science behind it: Mushrooms are believed to have soil-cleaning properties, according to a 2014 study.

Wearing a mushroom suit is already a way of life for Lee (she’s alive and well). Lee feeds mushrooms her hair, skin, and fingernails — stuff we all shed all the time — and then selects the best eaters to become part of her suit.

“It's a kind of imprinting and selective breeding process for the afterlife,” Lee said in a 2011 TED Talk about the suit.

“So when I die, the Infinity Mushrooms will recognize my body and be able to eat it.”

If you have to go, you can do worse than be eaten by your own bespoke mushroom suit.

More like this
Science
7.28.2022 6:00 PM
Meet the tiny critter that pollenates seaweed like a bee
By Jennifer Walter
Science
7.27.2022 5:17 PM
No, this newly discovered fossil doesn’t make the Loch Ness Monster 'plausible'
By John Wenz
Science
7.25.2022 7:00 PM
Humans wear cotton every day — now, the plant needs genetics' help to survive
By Serina Taluja and The Conversation