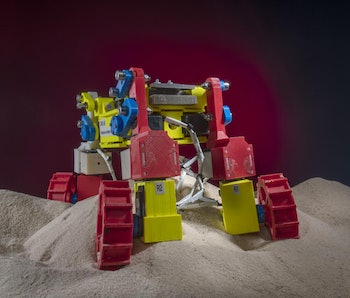 A team of researchers from Georgia Tech recently designed a Mini Rover that's capable of taking on the steepest hills of Mars, and the rocky surface of the Moon, wiggling its way out of rough terrains.

The team was supported by NASA's National Robotics Initiative.

The tiny robot looks about the same as a toy truck, but is designed with intricate locomotion techniques that allow it to pull off a broad range of motion. The scaled-down rover has four wheels, and 12 motors.

Wheeled appendages lift the robot off the ground, and its four wheels wiggle, which allow it to shimmy its way through sandy or soft granular surfaces on different planetary bodies.

The wheels also make the Mini Rover capable of climbing up steep hills covered in this type of soft, slippery surface. The Mini Rover basically combines paddling, walking and wheel spinning motions, a move the researchers dubbed 'rear rotator pedaling,' to climb its way up a slope.

"When loose materials flow, that can create problems for robots moving across it," Dan Goldman, the Dunn Family Professor in the School of Physics at the Georgia Institute of Technology, and a member of the team behind the Mini Rover, said in a statement. "This rover has enough degrees of freedom that it can get out of jams pretty effectively.

The Mini Rover basically creates its own tiny hill to help it get over the large ones. The front wheels create a small avalanche of materials, and pushes them back towards the back wheels. The back wheels then wiggle from side to side, lifting up in the air and spinning in a motion that sort of resembles paddling in water, climbing up smaller hills, one at a time, in order to get over a larger, steep hill.

"In our previous studies of pure legged robots, modeled on animals, we had kind of figured out that the secret was to not make a mess," Goldman said. "If you end up making too much of a mess with most robots, you end up just paddling and digging into the granular material."

"If you want fast locomotion, we found that you should try to keep the material as solid as possible by tweaking the parameters of motion."

The team of researchers collaborated with NASA's Johnson Space Center to design and create the robot using 3D printers. They then tested out the robot's abilities in small simulated environments inside a lab, creating crates of sandy surfaces and slopes to simulate the environment on different planetary bodies.

The purpose of these experiments on the scaled down version of a rover is to test out the locomotion techniques on these types of surfaces in order to apply it on future designs of larger robots that will be sent out on future missions to the Moon or Mars.

The Mini Rover was inspired by NASA's RP15 rover, a prototype lunar rover that was later scrapped from the space agency's budget.

More like this
Science
8.12.2022 10:00 AM
45 years ago, the first Space Shuttle made history without going to space
By Allie Hutchison
Science
8.3.2022 8:56 PM
NASA confirms Artemis I launch date and previews upcoming milestones
By Kiona Smith
Innovation
8.9.2022 2:00 PM
A small robot on the ISS will practice performing surgery in space
By Doris Elín Urrutia
Related Tags
Share: