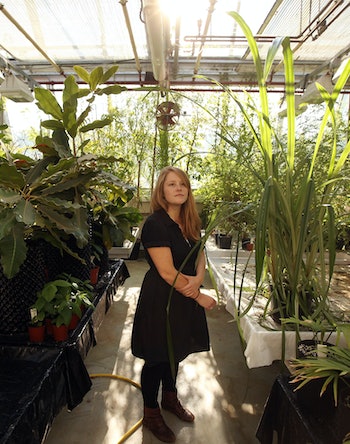 Your morning cup of coffee, your slice of toast with jam, your bowl of cereal — they all come from and rely entirely on plants.

Maintaining a diversity of plants is crucial for humanity — to adapt, innovate, and survive — and all the unknown plant species of the world are untapped resources for food, medicine, or biofuels.

But they are in danger. According to a new report from the Royal Botanical Gardens, Kew, two in five of the world’s plant species are at risk of extinction, owing to the slow but steady destruction of the natural world. The obliteration of wild habitats to make space for agriculture, the introduction of invasive species, the threat of climate change; all are contributing an increased urgency among scientists to find these species before they disappear forever.

“Every time we lose a species, we lose an opportunity for humankind,” Alexandre Antonelli, the director of science at the Royal Botanical Gardens, Kew, told The Guardian during the report’s release. “We are losing a race against time, as we are probably losing species faster than we can find and name them.”

Enter: seed banks. Stored deep below the ground of a country estate in the heart of rural Sussex, a quiet bit of southeast England, in deep-freeze chambers kept at -20°C temperatures, a gigantic trove of the world’s seeds can be found kept in Kilner jars called the Millennium Seed Bank.

“We've got this load of money, we've got a problem, can we help you fix it?”

The Millennium Seed Bank is a global initiative that coordinates the collection and preservation of seed stocks across the world. Described by Sir David Attenborough as "perhaps the most ambitious conservation initiative ever," it holds the largest wild seed collection in the world, and is often described as a “Noah’s Ark for plants.”

Since its inception two decades ago, it has collected over 2.25 billion seeds from 190 countries. The bank holds more than 96,000 seed collections, representing over 39,000 species from over 6,100 genera and more than 340 families.

Seed banks are a crucial resource for human innovation, adaptation, and resilience. It means that the seeds can one day be taken out of storage to be germinated and reintroduced into the wild, or used for scientific research in finding future food or medicines. They act as an insurance policy against the extinction of these plants.

“A gold reserve...a place where this reserve currency, in this case life itself, is stored,” said Prince Charles at the opening of the Millennium Seed Bank in November, 2000.

THE DREAM — In Rio de Janeiro in June 1992 at the first Earth Summit, one of the big issues raised was the world’s risk of losing a big chunk of its flora. Scientists at Kew realized they had the technology to safeguard these seeds and thus the Millennium Seed Bank was born.

Using Kew’s existing networks, those UK researchers reached out to nations around the world with this question: Would join them in their mission?

There were some initial growing pains in urging other countries to get involved. “Some countries weren’t too happy to have Kew coming into their backyard and telling them what to do about seed banking,” Tim Pearce, a seed conservation scientist and the organization's conservation and partnership coordinator, tells Inverse.“ Whenever you go out to the world, and you say Kew's gonna fix this, you rub people the wrong way.” So, there were early tinges of hostility in the beginning as the project came together.

“We had a bucket full of money, a load of nice British people coming over saying, we've got this load of money, we've got a problem, can we help you fix it?” says Pearce.

Luckily, however, many countries agreed to jump on board and the collection process began.

THE TEAM — The organization collaborates with over 100 biodiversity projects from all over the world. Through its international partnership program, it works with and assists seed collectives in over 95 countries, including Australia, Mexico, Chile, China, and many countries in Africa. The seeds are collected and conserved in the country of origin with duplicates being sent to Sussex for storage.

HOW THEY STAYED CONNECTED — To ensure that quality work is being done across all their partnerships, the project has a set of standards — 21 of them, to be exact — that must be continually met. One must collect from X number of species, must collect more than 20 percent, must dry and store in a correct way, and so on “so we know that the quality of material stored in the seed banks around the world is top quality,” says Pearce. Making sure these criteria are implemented and adhered to involves ample planning and training.

“No one country can solve the environmental problems that face us.”

The project pushes to empower the ambition of the people across their partnerships in the different countries, especially in developing countries, to enable them to work autonomously. This requires a lot of effort, says Pearce; lots of phone calls, emails, video chats. “Anybody can bring money to somewhere like Africa to get something done, but if you are truly a long-term partner, that takes face-to-face trust and building up those partnerships.”

The intense focus on building and strengthening international partnerships, particularly in poorer countries, is partly motivated by Kew’s history. In its early years, it exploited natural resources in colonies belonging to the British Empire. They have announced plans to make good on their speckled legacy. “We can do no better than demonstrate our value as a global player by developing overseas partnerships,” says Pearce, who focuses in particular on developing the seed conservation programs across Kew's African partners.

WHY COLLABORATING WAS SO IMPORTANT TO THE MISSION — Fighting the race against time to conserve these species is not something the UK could’ve done on its own. “No one country can solve the environmental problems that face us,” says Pearce.

“The importance of international collaboration is absolutely vital if we are to tackle the problems in the time scale that we’ve been given,” he says. “Because the graph of urgency is going up exponentially.”

They strive to work past the issues that may arise from working with and in other countries. Collaborating internationally forms the basis of Kew’s business model, he says, and it's why the project has been so successful.

SO, DID THEY ACHIEVE IT? In 2009, the Millennium Seed Bank reached its first major milestone: It succeeded in securing seeds from 10 percent of the world’s plant species.

Marking the project’s completion was the seeds of a pink banana from China. Called Musa itinerans, it is beloved by wild Asian elephants and it joined the collection’s 24,200th plant species. "It was chosen because it is representative of what the whole project is all about — it is endemic, endangered, and it is an economic species,” Janet Terry, the seed processing manager at the bank, told the BBC at the time. "And of course, everybody loves a banana."

In April of 2007, the bank collected their billionth seed. It was the seed of an African endangered bamboo, called Oxytenanthera abyssinica, and was collected in Mali, West Africa. The plant is used for building, furniture, and wine-making.

Pearce thinks that what the billionth seed milestone said about the power and success of the organization’s global relationships was just as satisfying as the achievement itself. “I saw that the power of international collaboration, getting these partnerships right, leaving a long-lasting legacy of friendship and mutual respect that can be built on to do much more powerful things, in a way, is equally as strong a legacy as the billion seeds in the seed bank,” he says.

WHAT’S NEXT — The project’s most recent and biggest goal yet was conserving 25 percent of the world’s plant species by 2020. But they have changed tactics ever so slightly. “What we're now very clear about is to make sure that we're getting the right 25 percent,” says Pearce.

The seeds that the project is working to save could grow a new generation of plants in the future, forming invaluable weapons to mitigate food insecurity, fight disease, and restore biodiversity to our planet.

Dream Teams is a series from Inverse that takes a look back at the greatest team efforts of the 21st century and what they mean for our ability to collaborate in the future.