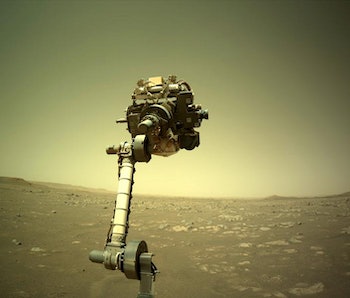 For the first time, space engineers have captured the sounds of laser shots being fired on another planet. And no, this isn’t science fiction.

NASA’s Perseverance rover has beamed back two mind-blowing audio clips from Mars, revealing the howling sounds of the Martian winds, as well as the sound of laser pulses shooting against rocks on the surface of Mars.

“I am thrilled to hear a real example of the pew-pew sound on Mars!”

WHAT'S NEW — The audio clips were released on Wednesday on NASA’s Soundcloud page. By receiving the sounds of Mars, the space agency has confirmed that the rover’s microphone instruments are functioning properly and ready to explore the Red Planet through a previously underexplored dimension: sound.

Perseverance carried not one but two microphones to Mars.

The Entry Descent and Landing (EDL) microphones were designed to capture the sounds of Perseverance’s landing on the red planet, while the second microphone on the rover’s SuperCam is designed to examine the rocks on Mars and give scientists a new way to explore them.

The first recording captures what it’s like to be on another planet, recording the sounds of the surface of Mars with its high speed winds blowing around the rover. The sounds were unveiled at a press conference on Wednesday.

Naomi Murdoch, a researcher at the National Higher French Institute of Aeronautics and Space, and a member of the team that designed the microphone, introduced the sounds of Mars during a press conference on Wednesday.

“These recordings are fascinating within themselves, but they also allow us to do atmospheric science,” she said. “We can listen to them, we can determine the wind speeds, the wind direction, and even study the turbulence in the Martian atmosphere.”

Meanwhile, a second audio clip allows us to listen to the sounds of lasers shooting on Mars as Perseverance tests out its instruments.

HERE'S THE BACKGROUND — The rover’s zapping of a rock is a way for Perseverance to study the mineralogy and chemistry of Martian rocks from up to about 20 feet away. By firing at rock samples, Perseverance can learn more about its composition thanks to the SuperCam instrument, which analyzes it through images and sounds.

“After years of listening to the laser in the laboratory, I am thrilled to hear a real example of the pew-pew sound on Mars!” Nina Lanza, a planetary scientist at Los Alamos National Laboratory and a member on the science team behind Perseverance’s camera-microphone system, tells Inverse.

“With this recording, we have now demonstrated that the acoustic experiment works beautifully in the field. I can't wait to hear what other rocks in Jezero crater sound like!” she adds.

Persverance’s SuperCam is equipped with a laser that zaps at Martian rocks at a distance of about 20 feet. As the laser fires at the rocks, a small amount of the rock vaporizes into a hot gas called plasma, and the heat and vibration creates a shockwave that makes a popping sound.

The camera and spectrometer identifies the chemical makeup of the vaporized rock while the microphone hears the popping sound. That ‘pop’ tells scientists about the mass of the rocks, and how hard or soft it is.

“Not only is it totally awesome to hear lasers pew-pewing on Mars, but we can also learn a lot about the properties of Martian rocks by listening to the change in acoustic signal as we shoot deeper and deeper with the laser,” Lanza says.

WHY IT MATTERS — Perseverance isn’t the first of NASA’s Mars rovers to be equipped with a microphone. But it’s the first successful one.

Previous NASA missions to Mars carried microphones, namely the Mars Polar Lander and The Phoenix. However, the lander mission crashed after a sensor malfunction, while the microphone onboard The Phoenix was never turned on.

By adding microphones to Perseverance’s journey through Mars, scientists now have one more “sense” through which they can explore the Red Planet and examine its rocks in search of signs of ancient microbial life. The microphone will also help shape our understanding of weather on Mars — and maybe give us more Soundcloud comments like “THIS BE A BOP” and “drop the beat.”

More like this
Science
8.12.2022 12:30 PM
Astronomers pinpoint the source of a mysterious cosmic particle
By Kiona Smith
Science
8.5.2022 12:15 PM
10 years ago, the Curiosity rover arrived on Mars — and revolutionized the hunt for alien life
By Allie Hutchison
Science
8.14.2022 7:00 PM
Do aliens exist? Jupiter’s moon Europa could hold the answer
By LAURENCE TOGNETTI and Universe Today
Related Tags
Share: