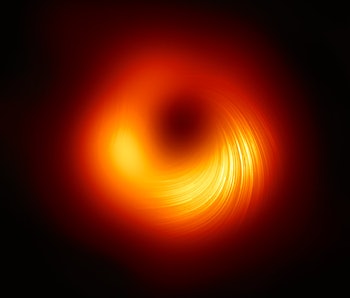 The first images from the James Webb Space Telescope (JWST) are out, and now we know what the telescope is capable of. On Tuesday, NASA, the European Space Agency, and the Canadian Space Agency kicked off a new era of space exploration and will answer some of the universe’s most puzzling mysteries — including what’s going on around supermassive black holes.

One particular image — the Stephan’s Quintet — had an interesting Easter egg: the outflows of a supermassive black hole consuming material near it. While Webb didn’t observe the black hole directly, the indirect evidence is exciting. But only one observatory is currently capable of staring at black holes directly: the Event Horizon Telescope collaboration.

The EHT gave us the first-ever image of a black hole in 2019 and just this year followed up with a picture of the supermassive black hole at the center of our own Milky Way galaxy, Sagittarius A*, abbreviated Sgr A* (pronounced “A star”).

With its instruments calibrated and ready to go, JWST has a packed schedule for its first year of observing. In just its first five months of active use, the space telescope will examine galaxy evolution, exoplanetary systems, star formation, active galactic nuclei, and more, with scientists vying for coveted chunks of observing time on the telescope. But if the circumstances were right, the EHT and JWST could team up to tell us more about black holes than has been possible to date.

While physicists like Karl Schwarzschild used Albert Einstein’s theory of relativity to propose black holes over a century ago, only relatively recently have astronomers begun to understand more about them, including how widespread they are.

“Over the last 20 or so years, we’ve learned that black holes are at the center of essentially every massive galaxy,” Jonelle Walsh, an astronomer at Texas A&M University, tells Inverse.

Walsh is leading a project that will use JWST to watch how stars swirl closely around the supermassive black hole M87, the subject of the EHT’s first image.

Studying the center of our galaxy

Our local supermassive black hole is also high on the list of JWST targets. Paired with radio wave observations from the EHT, astronomers hope JWST’s infrared eyes prove to be the key to unlocking some of the mysteries they uncovered when the EHT imaged Sgr A* the first time around. That includes some puzzling observations from the vortex of superheated plasma just outside a singularity’s event horizon.

While JWST isn’t powerful enough to give us actual images of a black hole like the EHT can, it can still watch for activity coming from the region just outside an active supermassive black hole, says Kazunori Akiyama, an astrophysicist at MIT’s Haystack Observatory and member of the EHT consortium.

Many supermassive black holes are surrounded by what are called accretion disks, which form as material from their surroundings gets sucked inward and spun into a disk of plasma, or superheated gas and dust, that moves at nearly the speed of light. It’s such an extreme environment that scientists can only guess at how physics works inside, even as recent observations hint that an accretion disk is likely home to strange new phenomena.

For example, when EHT scientists were observing Sagittarius A*, at the center of our galaxy, they could see the accretion disk spinning and subtly shifting throughout one night, Akiyama says. But even more interesting were powerful flares coming from the accretion disk, which astronomers had never observed around a black hole before. It’s likely evidence of powerful, mysterious forces at work.

“We really don’t know why the flares are happening around SagA*,” Akiyama tells Inverse.

The new insights forced astronomers to consider that their knowledge of the physics of the extreme environment around a black hole was incomplete.

“That actually killed many models, including our current best-fit model,” Akiyama says.

But with JWST’s second set of infrared eyes, astronomers will be able to get observations of a black hole’s accretion disk in multiple wavelengths of light, and over longer periods.

“We can probably compare how the near-infrared activity is related to complicated gas dynamics captured by the EHT,” Akiyama says. “That’s a very exciting thing.”

Peering into the void

There are plenty more mysteries surrounding black holes. One that’s emerged in recent years, Walsh says, are hints that black holes exert subtle yet powerful influences on not just their immediate surroundings, but on entire galaxies.

“Somehow, the host galaxy, on much, much larger scales … knows that there’s a black hole there, and they’re impacting each other,” she says.

The physical mechanisms that link the two aren’t understood right now, something that more powerful telescopes could help us tease out. Using JWST to watch how stars move inside distant galaxies, Walsh hopes to get better insights into these far-reaching connections between galaxies and the massive black holes that anchor them.

JWST should help astronomers study black holes in more fundamental ways, as well, like simply finding more of them. Walsh says our list of supermassive black holes is likely far from complete, and there are many more of these monsters to find in the universe. With more supermassive black holes on the books, astronomers can begin more rigorous studies of what they look like and how they behave. And with the EHT on the hunt for new black hole targets to image, JWST might be able to soon provide ideal targets for our next image of a black hole.

“Continuing to try and push at finding the most massive black holes in the local universe and really trying to populate the extreme end of this black hole mass scale will be very helpful,” Walsh says. “We have a lot of questions up there.”

More like this
Science
Jan. 25, 2023
40 years ago, NASA launched the space telescope that proved JWST could work
By Jon Kelvey
Science
Jan. 14, 2023
15 years ago, a spacecraft swung by Mercury to beat the Sun's gravity
By Allie Hutchison
Science
Jan. 22, 2023
Supermassive black holes may be bigger and more powerful than we previously knew
By John Wenz
LEARN SOMETHING NEW EVERY DAY.
Related Tags
Share: