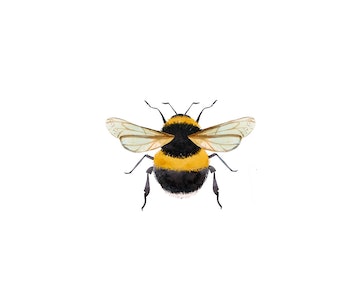 Bumblebees are putting the "bee" in biohacking in an effort to survive a bleak future, reports a new study.

Among the factors threatening bumblebees — climate change, disease, pesticides — is a loss of habitat. Bee populations struggle when there's not enough pollen to go around. However, some bees have figured out a potential solution.

When pollen is hard to come by, bumblebees nibble on the leaves of plants that aren't producing flowers, damaging the plant in a way that stimulates faster flower growth. Some plants bloom up to a month earlier than usual thanks to these nibbles.

This finding was reported Thursday in the journal Science.

Researchers Mark Mescher and Consuelo De Moraes, from the university ETH Zürich, first noticed this yet-unseen behavior in bees while working with bees in the lab. They were conducting experiments on how plants respond to insect herbivore eggs, and what that means for pollinators, when they observed the bees damaging leaves, the team tells Inverse.

The scientists weren't able to ignite blooms in the same way, suggesting bees have a unique ability to do so.

That had some effect on the flowers, but that effect wasn't comparable to what the bees could do.

"It’s quite possible that we are just not able to replicate detailed aspects of the bee damage that are important for the effect on flowering," the scientists explain. "It is also possible that some additional cue, such as a chemical in the bees’ saliva might be involved."

"In our outdoor experiments, the bees had the option of flying away to look for flowers elsewhere. But they still spent time damaging plants in the immediate vicinity of the hive," Mescher and De Moraes explain.

"That shows that this is definitely a behavior that occurs naturally," the researchers write.

While the outlook for bees has been bleak for years, this new research adds some complexity to bees' situation, and perhaps a glimmer of hope.

In the future, Mescher and De Moraes hope to explore this bee behavior in greater detail. They want to learn whether bees have preferences when it comes to what plants they damage — whether they lean toward certain species, certain parts of the plants, or enjoy plants of a certain age.

Meanwhile, if bees are able to make some of their own luck — changing their behavior to match the changing climate — it suggests they might be unexpectedly resilient, writes biologist Lars Chittka, who studies bee behavior, in a related commentary in the journal Science.

Bees can also teach us something about managing ecosystems, Chittka suggests. Since damaging plants with metal forceps and razors doesn't have the same effect on making plants flower, it's possible that bees are also injecting chemicals into plants that accelerate the flowering process. In turn, these findings also suggest that worker bees have an influence on the availability of local flowers.

"If so, scientists might realize a horticulturist’s dream by deciphering the molecular pathways through which flowering can be accelerated by a full month," Chittka writes.