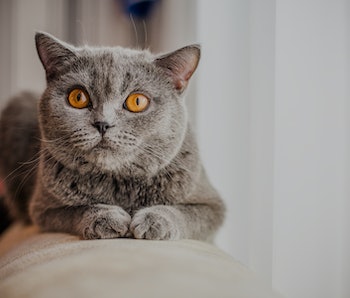 It’s becoming ever clearer that we live in a microbial world. By now, we are well aware that microbes play important roles in digestion, training the immune system, and protection from pathogens. Although many studies have been done in model organisms like mice, some researchers are now asking similar questions about the microbiota of other animals in the hopes that this could help us take better care of our furry friends.

KittyBiome, a crowd-funded research platform, was started because, as vets and pet owners know, domestic cats suffer from a lot of digestive issues. And because we simply don’t know enough about cat digestion, it’s hard for vets to recommend diets or even medication that can help in the long term. Scientist Jonathan Eisen has said that the idea for KittyBiome came out of discussions at the University of California (UC) Davis Citizen Microbiology meeting, and was developed by microbial ecologist Holly Ganz. Now, their group is showing just how much the microbiome does for cats.

This story originally appeared on Massive Science, an editorial partner site that publishes science stories by scientists. Subscribe to their newsletter to get even more science sent straight to you.

The group at UC Davis was keen to research the cat gut microbiome, and they decided to pursue an unconventional route to fund their research, using Kickstarter to seek help from the general public. Ganz is one of the authors of a report on how crowdfunding research can fill in funding gaps when resources from organisations like the National Institutes of Health (NIH) are hard to come by.

KittyBiome reached their funding goal, and involved their citizen scientist backers in the program by asking them to send cat poop samples for sequencing. The team set out with the goal of studying the guts of at least 1000 cats, to see how much variation there is between different cats; researchers want to compare cats living in houses, cats in shelters, and feral cats, as well as cats with different health conditions.

"A lot of cats and kittens with chronic diarrhea are euthanized, and if we could come up with something to help counteract this, we could be saving lives."

"This is a strong indication that at least some of the stinky molecules in cat spray are produced by bacteria.

This agrees with a previous study in hyenas showing that bacteria play a role in animal odors and generally supports a theory known as the Fermentation Hypothesis — that “symbiotic microorganisms living in association with animals contribute to odor profiles used in chemical communication and that variation in these chemical signals reflects variation in the microbial community.” This hypothesis is also supported by research showing that animals on antibiotics produce fewer smelly compounds in their secretions.

Fermentation is a microbial process that can happen when there is no oxygen present. It allows microbes to take energy from organic substances like sugar, and produces new small molecules that the microbes secrete as waste, like when yeast makes alcohol (ethanol) during beer production. Fermentation also happens in our guts all the time. Around 10 percent of the energy we use every day comes directly from short organic acids that our gut bacteria make by fermenting food molecules we otherwise can’t digest.

So what’s next for KittyBiome? Their long-term goals are to understand the effects of diet and behavior on cat health, to hopefully develop diet plans and perhaps pre- or probiotic products that pet owners can give to their feline companions. They are collaborating with Cat Tracker, a company that provides owners with GPS trackers for their cats, and connects those data with info about how cats live and behave, what they eat, and so on. The KittyBiome researchers want to try to correlate microbiome data with behavioral observations like distance traveled and the consumption of scavenged or hunted food. They are also analyzing samples sent in by owners who feed their cats a raw pet food sold in San Francisco, to investigate the impact of an uncooked diet.

More like this
Science
21 hours ago
Wastewater can track viruses like Covid-19 — can it do the same for superbugs?
By Allison Parshall
Science
8.14.2022 1:00 PM
'Gifted' dogs may share this one personality trait. Does your dog have it?
By Tara Yarlagadda
Science
8.9.2022 10:30 AM
Is my dog depressed or happy? Pet experts explain how you can tell.
By Tara Yarlagadda
Related Tags
Share: