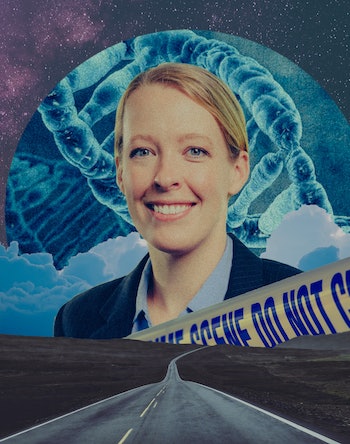 There are thousands of violent crime cold cases in the US, many of which have gone unsolved for decades. Those cases are never forgotten, and investigators never stop trying to solve them, but most often, there simply isn’t enough information to connect the perpetrators to the crime scenes.

Government-sponsored DNA databases, such as CODIS, have been extraordinarily effective for matching crime scene DNA to previous offenders, but in the cases we work on at Parabon, the perpetrators have managed to avoid ever having their DNA collected by law enforcement.

That crime scene DNA profile has been sitting in a database for decades waiting for a match, but the perpetrator has never been available for comparison. Sometimes that’s because the perpetrator has died, while others have simply managed to live under the radar. They’ve been able to go on living their lives while their victims had their lives taken away.

When detectives come to us with crime scene DNA, they’ve already uploaded the DNA to a database and not gotten a hit, and they’ve already excluded all the obvious suspects. These cases often have no witnesses, so the only information detectives have about the perpetrator is whether they are male or female, which is one of the only things that can be determined from a traditional DNA profile. Beyond that, it could be anyone.

Our goal is to use innovative forensic techniques, such as DNA phenotyping and kinship inference, which I helped create, as well as the genetic genealogy methods created by my colleague, CeCe Moore, to generate information from DNA that couldn’t have been retrieved any other way.

"Without this new information, a lot of these cold cases might never be solved."

Frankly, without this new information, a lot of these cold cases might never be solved. There is just not enough evidence to point to the perpetrator. But what we’re consistently finding is that if there’s DNA — even if it’s from 50 years ago — it still ties that perpetrator back to that crime scene. The DNA just needs to be analyzed in a new way, such as using DNA phenotyping to generate a description of the perpetrator’s physical appearance.

In cold cases, it could be that one piece of new information that suddenly changes everything. Maybe it changes how the investigator is looking at their case file or prompts them to look in a different direction.

In some of the cases we work on, investigators think they have a description of the person, and all the case information has been interpreted in light of that description. But when we analyze the DNA, we find the perpetrator’s appearance is actually quite different. And just pivoting toward that new description is enough to get them on a path that leads to an ID.

In addition to cold cases, we’re also seeing that these techniques can be used to keep cases from going cold in the first place. Now, when crime scene DNA doesn’t hit in a database or match any of the suspects, detectives don’t have to wait 30 years for a new technology to come along.

With DNA phenotyping, for example, those detectives can know immediately that they’re looking for someone of a particular description and avoid chasing false leads. Or, through genetic genealogy, our analysts can build a family tree around the DNA and help figure out who that person was.

As these techniques become more common, I think we will see a decrease in the rate at which cases go cold in the US.

We’ve even worked on active cases where someone has committed multiple crimes, and the crimes are escalating, but the DNA has not yielded any leads. It is hugely important to solve these cases as soon as possible, before more offenses can be committed, and the leads we generate have helped detectives stop some of these offenders in their tracks.

"We know we can’t change what happened, but at least there’s some justice."

We talk with the families of victims, who tell us how difficult it is not knowing what happened to their loved one, while also knowing that the perpetrators are still out there. For a community to feel safe, it’s crucial to find these perpetrators. And for the families, we know we can’t change what happened, but at least there’s some justice. At least they don’t have to be afraid every night that the perpetrator is still out there.

Of course, while criminal investigations are a huge part of what we do, the work is not just about identifying perpetrators. There are tens of thousands of unidentified remains in the US, and these new forensic techniques are moving us in a direction where we can finally figure out who those people were. Many of them met a violent end, but without knowing who the victim was, investigation is extraordinarily difficult.

Detailed pigmentation and ancestry often can’t be determined from a skeleton, but the DNA still carries that information. Familial relationships can also be established from the DNA. For example, there are fallen soldiers dating all the way back to World War II who remain unidentified.

While unceasing effort and innovation has yielded identifications for many fallen soldiers from past conflicts, some remain unidentified because no close family members are available for comparison, and there hasn’t been technology to tie their DNA to distant family members. We have been pushing our techniques further, so we can figure out who these people were and finally return them to their families.

Forensic DNA presents a lot of unique challenges, such as small quantities, degraded DNA, and mixtures between multiple people. As time goes by, we learn more and more about how to deal with these issues, and we are continuing to develop new ways to generate significant leads and communicate the results to detectives in a clear and concise way.

I know there are other traits out there that we might be able to predict, like whether a person has curly or straight hair, or whether they’re likely to go gray or bald. It’s just a matter of getting enough data to build accurate predictive models.

There’s also been some literature showing that it might be possible to determine someone’s age from a DNA sample. That information could be incredibly helpful for investigators. I’m excited about transitioning developments like that into real applications, and I think this will just keep getting better.

Ellen Greytak is the director of bioinformatics at Parabon NanoLabs. She is an expert in using comparative genomics to study complex traits, which can be used to identify suspects in cold cases. Greytak is a member of the Inverse Future 50.