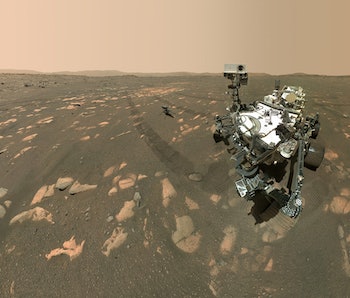 The moment she finishes her shift on Mars, Vandi Verma takes a second to reorient herself. She gazes out at the Red Planet, locating the faintly twinkling sun in the night sky. Then, she comes back to Earth.

“But when you look at Mars in the sky and see how far away it is, sometimes you just realize the big picture and it’s... it’s interesting.”

Verma’s work on Mars is the driving force behind the Mars 2020 rover. As the chief engineer for Robotic Operations for NASA’s Perseverance rover, she spends her days immersed in a world of Martian terrain. She even operates on “Mars time” here on Earth.

With her feet firmly planted on Earth, but her brain on Mars where she has driven rovers for the last 13 years, she’s gained a rather unusual view of our place in the universe:

Verma understands things most humans will never grasp: How to operate on a literally different world and navigate oneself on a different planet.

This includes how to exist on both Earth and Martian time — circadian rhythms and sleep cycles be damned — and the unexpected perks of spending most of your life with robots.

Ultimately, Verma’s experiences offer some profound life lessons for us here on Earth — and a sketch of how humans might adapt to live on the surface of Mars.

5. How to work on Mars time

Verma spends her days on Earth, but her brain runs on Martian time. This is tricky to manage for a simple reason: A day on Mars is a little longer than a day on Earth.

“I do find it is taxing to the human body because we have rhythms, and now you're changing it,” Verma says.

Often Verma begins a shift past midnight on Earth, yet it’s the late evening on Mars.

“Suddenly you’re brought back into a world that’s completely different.”

“You’ve been immersed, you’ve been [on Mars] for hours and you walk out and it’s a completely different time of day [on Earth],” Verma says. “Depending on Mars time, sometimes I’ve walked out and it’s dark, sometimes there’s a sunrise or sunset.”

“Suddenly you’re brought back into a world that’s completely different,” she says.

To adjust to this planetary time difference, Verma avoids exposure to the outside world here on Earth while she’s working on Mars time. That includes avoiding any windows, so she doesn’t see the light outside. She also regulates her meals according to Mars time, and even adjusts her clocks accordingly.

4. How to lose yourself on Mars

When Verma drives the Mars 2020 rover, she first writes the commands for the rover to follow and then beams them up to Mars using the Deep Space Network, NASA’s interplanetary communications network. The network is comprised of three deep-space communications facilities in Australia, California, and Madrid.

During a typical workday, Verma is thrust into the Martian environment for about 10 hours. Her team use images captured by the Perseverance rover to create a three-dimensional, simulated version here on Earth. They wear special 3D headsets to transport themselves into that world.

“I don’t know if there are rocks on Earth that I know as well as I know some of the rocks on Mars.”

Looking with clear eyes at some of the selfies captured by the Perseverance rover on Mars, Verma tells me she’s familiar with the Martian terrain around the rover that she recognizes the tire tracks from previous drives. They become landmarks to navigate her way.

“When you’re driving, you’re so immersed in an environment,” Verma says. “I don’t know if there are rocks on Earth that I know as well as I know some of the rocks on Mars.”

3. How to return to Earth

Verma has been driving rovers on Mars since 2008 — that means she has spent more than a decade living between two different worlds. She has also witnessed the Mars rover missions evolve and change over time.

After being immersed in the timezone and environment of another planet for hours, Verma often finds it challenging to come “back” to Earth. Hence her ritual of looking up at the night sky, at the stars and planets, to find her sense of place once more.

“You’ve thought so much about it for hours, so in terms of coming back to reality on Earth,” Verma says. “It can be especially challenging.”

But Verma’s “work-from-Mars” may soon be the reality for some as space agencies and private space conglomerates plan for a highly ambitious future colonization of the Red Planet.

NASA is planning on sending the first human mission to Mars by the 2030s while SpaceX CEO Elon Musk wants to build a human colony on Mars that involves eventually terraforming the planet to be able to support life. Future astronauts will have to reckon with the new Martian time zones in communications home — as well as the kind of long delays in sending messages back and forth.

The Perseverance rover is the most advanced robot NASA has sent to Mars and much more autonomous than its predecessors.

For the scientists (and the public), personifying the rover and assigning it human-like qualities can help to make its journey on Mars more real, despite being so far away. But for Verma, Perseverance is much more than human — the robot is an accumulation of knowledge from a group of highly intelligent humans, almost beyond the human.

“There are so many people on Earth who worked on it and they all have different expertise so it’s a combined intelligence,” Verma says. “It is a machine but there’s also an aspect of intelligence that we help design, so I feel like you’re interacting with this sophisticated thing that in some ways is more intelligent than any one individual.”

1. How to see the big picture

Verma is aware of the critical importance of her work. She’s keenly aware that she works with a machine that humans designed and delivered to Mars to explore its terrains for essential knowledge about life in the Solar System, and in turn, life on Earth.

The main purpose of the Perseverance mission is to investigate whether or not Mars may have hosted some form of life at a point during its early history. If the rover can answer this question, then scientists can answer another more profound question about our origins, and whether there may be extraterrestrial life elsewhere.

It’s also a final step toward NASA’s goal of human exploration. While there are sample return ideas that the agency has batted around, ultimately, Perseverance’s cache may best be retrieved by human hands, who could confirm quickly with those precious samples if life has ever existed on Mars — or even still exists deep below the surface.

Verma explains how viewing Mars as a speck in the sky from our viewpoint on Earth, she manifests for herself her place in the quest to solve the biggest mysteries of our existence.

“Looking at the sky and seeing Mars in the sky,” Verma says. “You do disconnect.”