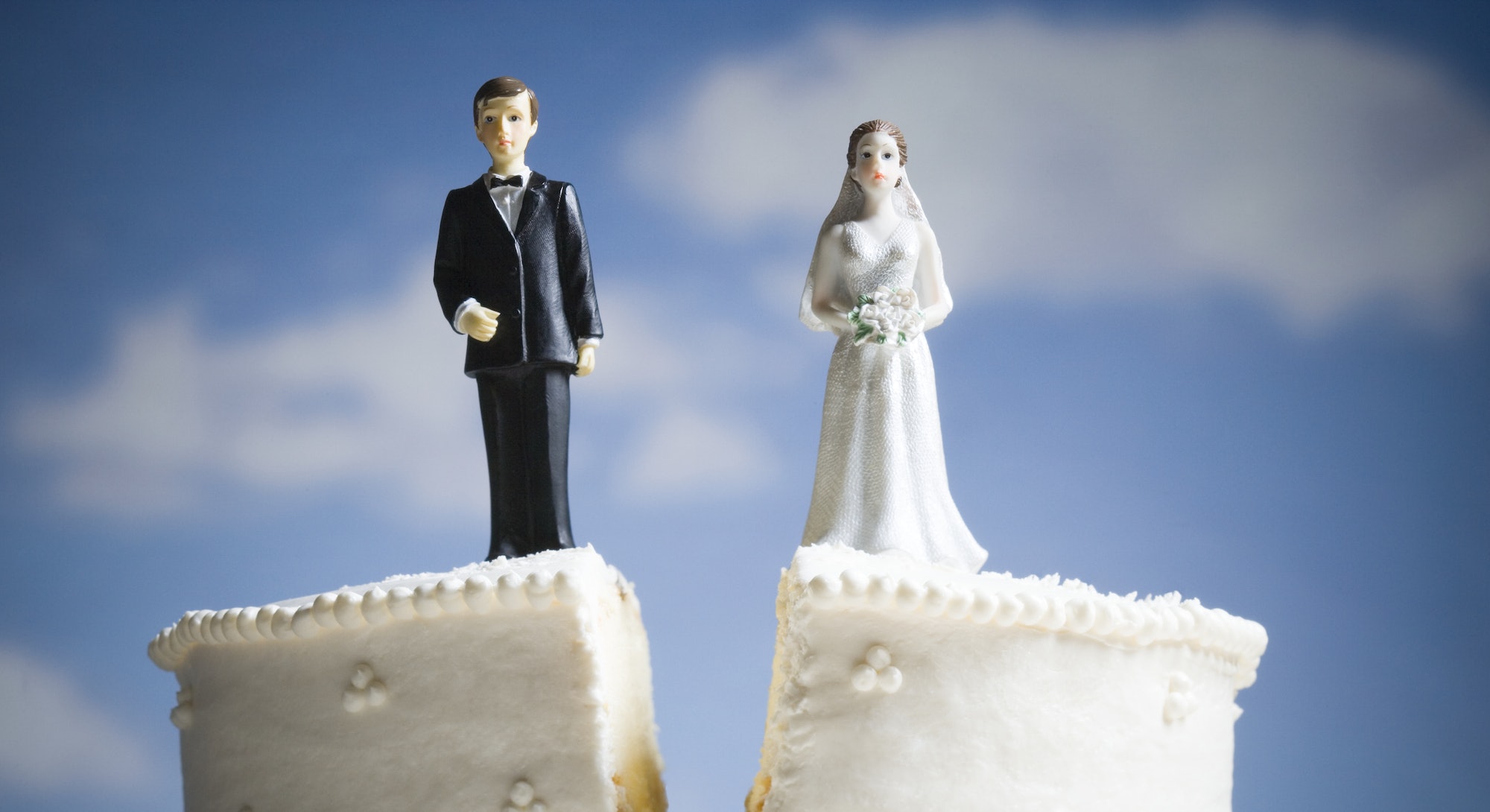 A self-described perfectionist, Josh* says one of the most challenging experiences during his divorce was the “feeling of failure.”

“I beat myself up for well over a year for not being able to make it work and obsessing over mistakes I made,” Josh, a 30-something-year-old from Michigan, tells Inverse.

Today, he regrets not seeing a therapist before his marriage’s end.

“I actually waited until a year after my separation and I should have started way earlier,” Josh says. “But for some reason, I didn’t want anyone to know how much I was hurting.”

Divorce can be a physically and emotionally devastating experience even if ending a marriage is ultimately the right thing for both people. Research suggests divorced people’s physical and mental health, especially in the first several years after their divorce, is worse than that of the general population.

Studies on heterosexual couples suggest that while both partners are vulnerable to dips in mental and physical health following divorce, men are more prone to mood and anxiety disorders in the first post-divorce years.

Inverse spoke with experts and five men who have been through a divorce about what helps during this challenging time and what definitely doesn’t. While the pain following divorce is perhaps inevitable, how you frame and process those feelings can make all the difference. Ultimately, being mindful of how you’re feeling, taking care of yourself, and asking for help if needed will set you on a path or a healthier and happier future.

Why do people get divorced?

David Reiss, a clinical psychologist and trauma expert, tells Inverse the reason behind the divorce is crucial to understanding what is considered “healthy,” “unhealthy,” or even “typical.”

He says there are three general reasons people get divorced, none of which are mutually exclusive.

If you’re undergoing one of the first two situations, Reiss advises you to seek individual, professional help. But if you’re experiencing or have gone through the third — like most of the men Inverse interviewed — he proposes actionable steps you can take to process your pain in a healthy way.

Do men and women deal with divorce differently?

Thomas Leopold, a Professor of Methods of Empirical Social Research at the University of Cologne’s Institute of Sociology and Social Psychology, is one of the authors of a study that examined heterosexual couples immediately after a divorce. The study team found men tend to have a more difficult time psychologically than women.

He tells Inverse that for those men, “divorce more comes as a shock.”

“Women suffer differently. They make more efforts to save the relationship but also take a more active role in ending it,” Leopold says. “On average, women appear to start the coping process earlier, and this makes them less vulnerable to the event itself.”

Women, he says, have different stressors after divorce. For example, one common factor is that women tend to be more negatively affected financially by divorce, which can foster its own kind of anxiety.

These are, of course, generalities. But the trends are essential to be aware of, so they can be recognized and addressed constructively.

How do men cope with divorce?

The first thing men who are going through a divorce need to know is that pain following the end of a relationship is natural because you lost something you once valued.

“Assuming that a marriage was initially based on love, caring, and the desire to spend time in each other’s company, the ending of the marriage is inherently sad and painful, regardless of the circumstances,” Reiss says.

A so-called “healthy” divorce involves being able to process those emotions without falling into prolonged states of anxiety or depression.

However, Reiss adds, “Even when negative emotions are ‘processed’ optimally, they may still take a toll on the physical body as well as the psyche.”

A “healthy” divorce, he says, “strives to reduce all of those risks – with the understanding that they cannot be completely eliminated.”

Can divorce be less painful?

The emotional “stages” of dealing with divorce are essentially identical to the “stages of grief,” according to Reiss. These are denial, anger, bargaining, depression, and acceptance. However, he cautions against thinking of it as a linear process.

Instead, the stages “intermingle and move back and forth in a messing and conflated manner, hopefully moving toward resolution, but the path is neither straight nor smooth,” he says.

Josh says that in the wake of his divorce, his emotions ran the gamut. His experience aligns with the third category Reiss mentioned: Josh and his wife grew apart in a way that proved to be irreconcilable.

“I ran the spectrum of emotions,” he says, “fighting to save my marriage, being angry at my ex for giving up, being angry with myself for failing as a husband, and feeling like I would never find anyone again.”

This spectrum is natural — and in some cases, a healthy part of the process. However, there are steps you can take to minimize excessive rumination or beating yourself up.

Reiss’ best advice might sound trite, but its importance can’t be overstated: self-care.

He recommends a similar process for anger:

Reiss also advises men to be aware of these common pitfalls:

“Seek appropriate comfort and solace from persons who care about you and whom you can trust,” Reiss adds. “Don’t rush yourself to conform to any specific ‘pathway’ to recovery – as long as it is safe and reasonable, chart your own course.”

When should you seek professional help to cope with divorce?

Because a whole range of emotions is expected and healthy to feel in the wake of a divorce, it can be hard to know when they’ve reached a point that would benefit from therapeutic intervention.

Reiss says professional attention is required when the natural emotions that occur following a divorce turn into symptoms of clinical anxiety, depression, and self-harm.

Paul*, a 50-something in Ohio, has been through two divorces. He tells Inverse he dealt with the divorces poorly and ended up repeating past, destructive behavior. He was also experiencing combat PTSD, which was undiagnosed at the time.

“My main coping mechanism was isolation,” he says. “I felt that this helped me minimize the danger I was to society and avoid relationships that I could damage somehow.”

When he did date, he “focused on trying to fix a woman instead of focusing on myself… my last marriage was based on my sole focus on her.”

All the men Inverse spoke to said they found getting outside help to be invaluable and, in some cases, only regretted that they hadn’t done it sooner.

Michael*, a 40-something in Ohio, says he started going to therapy a year before his divorce. His therapist helped him realize the relationship he was in was abusive and it was time to end the marriage.

“We tried couples counseling, and both the counselor and my therapist identified that she was emotionally abusive,” he says. “I knew she wasn't the nicest to me, but that was a shock and wake-up call.”

How can therapy help men going through a divorce?

Reiss says there are several ways a therapist can be helpful to someone going through a divorce:

Therapy can also set you up for better relationships. Through therapy Paul, the combat vet from Ohio, was able to identify harmful patterns, receive treatment for PTSD, and finally understand himself.

“If you don’t understand yourself, you will constantly be repeating the same set of behaviors, the same set of decisions, which led to the failure of the marriage,” Paul says.

Michael, meanwhile, is pointed in his advice, saying “therapy is my first, second, and third recommendation” for getting through a divorce.

If therapy doesn’t feel right for you, Sam*, a man living in Michigan, says a life coach helped him immensely.

“I tried counseling, but what made the biggest impact was investing in a life coach,” he tells Inverse. “It re-opened my mind to all the possibilities I had previously given up on due to the trauma of the marriage.”

Brian*, a 30 something in Minnesota, says in addition to therapy, he’s found support on the R/Divorce_Men subreddit.

There are also in-person and online support groups.

Will the pain of divorce ever end?

Leopold’s research suggests that after about a year, the psychological distress men experience because of divorce starts to lift.

“It is good that we live in times when people can divorce,” he says.“We have to remember that after all, divorce is a good thing because it liberates people from a bad relationship. The separation process is a massive stressor but when it comes to personal well-being, most people — men and women — recover well.”

“I now know how I expect to be treated and how much I can give to another.”

While it may not feel obvious at first, divorce can be an opportunity to make your life your own. For example, Josh says after his divorce, he forced himself to be social so he didn’t “just sulk around.” He traveled by himself and threw himself into hobbies, old and new.

“I made some of the best woodworking projects during this time because I could get my focus off the divorce on something else, like not cutting my finger off,” he says.

Michael says after his divorce he “redecorated and made the space mine.”

“Another important thing for me was contact,” he says.” I only contact the ex about kid-related things. I don't care how she's doing, I don't care if she's dating — it's none of my business. The absolute minimum contact helped me heal faster.”

Now, Michael is in a healthy relationship.

“I now know how I expect to be treated and how much I can give to another,” he says. “It's valuable, I'm worth it, and it feels good.”

DETOX is an Inverse series that answers the biggest questions about men’s mental health.

If you have suggestions for a future Detox column, email detox [at] inverse [dot] com with “Detox” in the subject line.