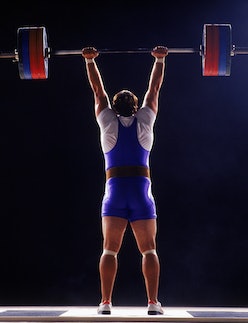 There’s something profound about seeing a person with correct posture.

Forget sitting — most of us, whether we lift or not, don’t even stand straight. We tend to have variations of what my trainer casually calls “standard American posture” —shoulders rounded forward, neck sticking out, hips in front of toes. Someone standing correctly — vertical, aligned, upright — is a rare sight. It’s a silhouette that feels more impressive than one with all the right muscles.

If you think you have bad posture, you probably do. Bad posture has many manifestations beyond the standard description above. Speaking generally, it tends to be caused by a sedentary lifestyle. (Some athletes or gym-goers might have funky posture caused by their training, but I doubt they are reading this column. Every person’s imbalances are unique, and the result of many inputs.)

The silver lining is because it’s so widespread, there’s a rich taxonomy of postural identification and a wealth of resources about how to fix these imbalances. Exercises, movement reorientations, and stretches can turn a jacked-up way of standing into something more upright and less painful. However, getting rid of imbalances outright can be very specialized, and may require one-on-one training.

This article will review what posture actually is and the actionable steps you can take to improve yours. Doing so supports good health, and, more specifically, can make you a better lifter. Standing up straight is the least taxing way for a body to function, and allows the muscles to move more in alignment. Speaking very generally, a good resting posture allows lifters to best express their strength when they’re active.

How to define good posture

Correct posture looks different for everybody, but we can roughly define it as stacked joints: a simple visual cue of ears over shoulders, ribs over hips over heels, pelvis, and spine in a neutral position.

Standing this way, the body shouldn’t lean forward or back. Gravitational pressure gets distributed evenly among feet, knees, hips, back and the neck, like a six-pole tent where each one does the same amount of work. It’s the easiest default position for the body to be in and puts it under the least amount of stress.

Individuals who don’t sit very much — toddlers, and folks in differently-oriented societies — seem to have it. So do some athletes.

Bad posture is the tent you don’t want to be under, where some poles do more work than others, and things are uneven. Misalignment causes some muscles to work harder than others — the lower back might be pushed to its limit because of weak hips — leading them to get tighter, and shorter.

Posture can be driven by a number of factors beyond lifestyle and activity, including:

There are plenty of ways to deviate from a neutral, stacked posture. Lower crossed syndrome, best known as anterior pelvic tilt, is where the butt sticks out owing to tight hip flexors and weak glutes. It is common. Rounded shoulders are often caused by a weak upper back, and text neck can be due to poor neck stabilizer muscles and craning our heads towards screens.

Everybody’s bad posture is different, but these predominant archetypes tend to be characterized by weakened posterior chains, which themselves can be tied back to sedentary behavior and prolonged sitting.

The effect of posture on health and exercise

Small misalignments and imbalances can stress the body over time. In addition to overactive muscles becoming tighter and shorter, a 2014 study found texting with your head tilted forward is equivalent to carrying 60 pounds of pressure on your spine.

Poor posture and misalignment can also lead to lousier results in the gym and on the field: misalignment means less fluid movement and hang-ups. Athletes who stand with one shoulder lower than another could well be weaker on one side; those who aren’t stacked expend their energy quicker when at rest.

Which has led to a swath of high-level athletic training houses, like Functional Patterns, and Human Garage, that focuses on both smoothing out elite athletes’ tiny imbalances and getting desk jockeys upright. And while there’s a limit to how much-generalized posture work can help — people’s unique tensions and imbalances ultimately lead to different postures, and require individual approaches — some generalized approaches can help fix big problems.

How to get better posture through exercise

Achieving quick and dirty good posture is a two-pronged approach:

Suitcase carries — where you walk with a weight on one side — force lifters to maintain balance while moving, and keep their spine stable with unbalanced weight. Overhead work, like barbell carries, do the same, and target upper back muscles that keep shoulders open. They often require a tucked chin, which itself is a movement hack that ensures the ears stack over the shoulders. Consequently, one study has shown that tucking the chin on lifts can reduce back pain.

Individuals with serious imbalances may find these exercises difficult, since misaligned and uneven bodies may be unable to get mobile and stable on lifts. (With one hip much tighter than the other, it may be too hard to get in the hole.) These lifters should probably talk to a trainer.

Though sometimes it’s about working up to a squat or doing kettlebell work — which is more dynamic and forces the lifter to become stabilized and active during a movement.

Rounded shoulders and text neck can sometimes be fixed by horizontal pressing work — like face pulls, where a lifter pulls a band or weight towards them — which isolates the deltoid and rhomboid muscles that bring the shoulder blades together. Enough of these and your upper back will feel different.

Batwing rows — lying face-down on a bench, and rowing up with your upper-mid back — also help, and mimic what deadlifts and rows do when those exercises are new, and the weight isn’t too heavy. A modified stretching and lifting routine — made up of alternating anterior and posterior pelvic tilts, hip thrusts, glute bridges, RKC planks, and a couple of stretches — can help get an anterior pelvic tilt under control.

Lifters can supplement their work with movement hacks. Hanging from a bar is a great, simple way to open up shoulders and take weight off the spine. Holding positions for a long time — like Dan John’s six-minute squat challenge, where you sit in the hole for that long, and goblet squat every 30 seconds — can be revelatory, and de-gunk the hips. Abductor holds — where you sit, pelvis rolled forward, with a band at your feet, and squeeze against it, working the hips — also work well.

But lifts and stretches are just one part of it — so much of getting good posture is practice.

A lot of it comes down to paying attention. Mark Cheng, a functional strength trainer, suggests standing a few minutes a day with a tucked chin and focusing on improving that position. Naudi Aguilar, a trainer and the founder of Functional Patterns, goes even further and has a litany of cues on how to stand stacked and upright. (His theory is that if you’re not actively standing, you’re not doing it right. There’s good stuff on his YouTube, but the real stuff is behind the paywall.)

One cue that’s helped me in the past is to stand upright, my joints stacked, and think about my feet tearing open a piece of paper beneath me. Another is to think of my glutes just behind my feet.

Done right, these aren’t just thought exercises, but humbling work where the body shakes after a few minutes. They’re also cues we can work on whenever we want, whether we lift weights or not. In fact, we might have to: many of us are closer to “standard American posture” than upright and should do something about it.

Each individual’s specific imbalances and tensions make achieving correct posture, at a high level, a hyper-specific pursuit. Muscle hacks only take us so far, and what straightens one person may not help somebody else. We’ll probably have to pay for a trainer or program if we really want to get seriously upright. And in the process, we’ll become stronger.

But we can get better, up to a point, if we lift right, and focus on our posture and try to improve it. The nice thing is, we can do it throughout most of the day — so long as we stand up first.