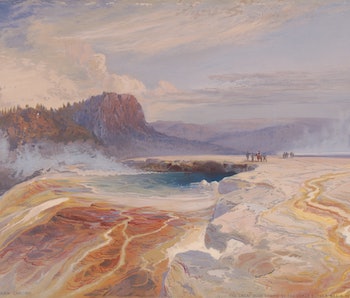 In the United States, every single national park has its distinctive symphony of natural sounds.

At Yellowstone National Park, for example, the acoustic environment consists of the sounds of bubbling mud and wolves howling in the distance, recalls Rachel Buxton, a conversation biologist and research associate at Carleton University, Ottawa.

“These natural soundscapes deserve our protection. But we are losing them and the health benefits we get from them,” Buxton tells Inverse.

In a study published Monday in the journal Proceedings of the National Academy of Sciences of the United States of America, Buxton and colleagues detail how natural sounds like flowing water and birds chirping can induce positive health effects. These include:

The research team studied the distribution of natural sounds along with the noise of human activities at 221 sites across 68 national parks. Interestingly, even in popular national parks with higher numbers of visitors and higher levels of noise as compared to other national parks, the natural sounds were still frequently associated with health benefits.

“One of the most interesting results from this study was that natural sounds and noise had greater health benefits than just noise,” Buxton says. “ If you live in an area in a city where all you are hearing is noise pollution, it is a lot worse for your health than living in an urban area where you are also hearing natural sounds over the top of noise.”

The two natural sounds most likely to induce a sense of tranquility and influence positive health outcomes?

The study also suggests that while natural water sounds are the most effective in positively influencing your health, bird songs can also restore attention and increase the familiarity and pleasantness of a soundscape.

Necessary background — An ornithologist and conservation biologist, Buxton previously worked at the National Park Service’s Natural Sounds and Night Skies Division in Colorado. It was then when she first delved into the importance of protecting natural sounds from the noise of human activities.

One of the ways the officials at the division worked toward reducing the effect of noise from visitors was to introduce quiet zones in national parks, complete with signs requesting people to appreciate certain areas quietly.

“We found that people listen and it significantly reduces the amount of noise along with shuttle buses that reduce traffic inside national parks,” Buxton explains.

Digging into the details — To gain a deeper understanding of natural soundscapes, Buxton and her team conducted a meta-analysis of 18 scientific publications that examined the health benefits of natural water flow, like rainfall or waterfalls, bird sounds, and noises from human activities as a control.

Sixty-one percent of these studies occurred in a laboratory or hospital setting rather than in the field. The research was conducted in 11 countries and eight studies were based in Sweden. The mean sample size of the studies was 150.6 participants. Just 19 percent of the studies evaluated the health benefits of natural sounds via measurements, such as heart rate, blood pressure, perceived pain, and cortisol or stress hormone levels.

Out of the 221 sites, only 50 had moderate audibility of noise (25 percent to 50 percent ), all thanks to fewer visitors and human activities. There was, on average, high audibility of natural sounds — which is defined as being heard 75 percent of the time during monitoring — including those associated with the local weather.

Why it matters — The meta-analysis revealed the importance of sounds, especially abundant, flowing water sounds, when it comes to masking the noise of traffic and other human activities. Water features are also useful as urban landscape elements to enhance acoustic environments, the researchers observed.

“Protecting natural sounds and being immersed in them is a pretty young area in the environmental movement,” co-author George Wittermyer, an associate professor of conservation biology at the Colorado State University, tells Inverse. “Something that we have overlooked in the past is how valuable the natural soundscape is as a resource asset.”

“The aim of the study is that people will spend time immersing themselves in natural soundscapes and not inundate the experience with noise that degrades the natural environment,” Wittermyer says.

In national parks, programs like “soundwalks” can be used to improve awareness and the appreciation of natural soundscapes.

“So, the next time you are in a park or your favorite green space, just close your eyes and be aware of the natural sounds around you,” says Buxton.

Abstract: Parks are important places to listen to natural sounds and avoid human-related noise, an increasingly rare combination. We first explore whether and to what degree natural sounds influence health outcomes using a systematic literature review and meta-analysis. We identified 36 publications examining the health benefits of natural sound. Meta-analyses of 18 of these publications revealed aggregate evidence for decreased stress and annoyance (g = −0.60, 95% CI = −0.97, −0.23) and improved health and positive affective outcomes (g = 1.63, 95% CI = 0.09, 3.16). Examples of beneficial outcomes include decreased pain, lower stress, improved mood, and enhanced cognitive performance. Given this evidence, and to facilitate incorporating public health in US national park soundscape management, we then examined the distribution of natural sounds in relation to anthropogenic sound at 221 sites across 68 parks. National park soundscapes with little anthropogenic sound and abundant natural sounds occurred at 11.3% of the sites. Parks with high visitation and urban park sites had more anthropogenic sound, yet natural sounds associated with health benefits also were frequent. These included animal sounds (audible for a mean of 59.3% of the time, SD: 23.8) and sounds from wind and water (mean: 19.2%, SD: 14.8). Urban and other parks that are extensively visited offer important opportunities to experience natural sounds and are significant targets for soundscape conservation to bolster health for visitors. Our results assert that natural sounds provide important ecosystem services, and parks can bolster public health by highlighting and conserving natural soundscapes.