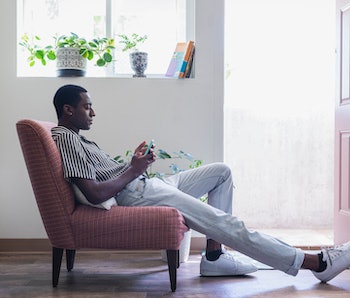 With long commutes, endless streaming options, and increasingly blurry work-home divides, people are sitting longer than ever before. On average, Americans sit between six to eight hours each day, a number that's likely risen due to the pandemic.

This sedentary habit can come with catastrophic health costs. Prolonged sitting for over six hours has been linked with Type 2 diabetes, obesity, heart disease, stroke, and a higher risk of premature death.

We know sitting for hours on end hurts the body. But how does the same sedentariness influence the mind?

This week, Inverse aims to answer that question, looking at the surprising connections between physical inactivity and cognition. Based on the mixed bag of research, it's crucial to work out the body regularly — and strengthen the mind daily.

As we head into the new year, moving more and incorporating reading or puzzles throughout the day could make the difference between peak performance and suboptimal results.

I'm Ali Pattillo and this is Strategy, a series packed with actionable tips to help you make the most out of your life, career, and finances.

Is sitting really the "new smoking"?

To date, research on sedentariness and cognition has come up with inconclusive findings. Scientists know regular bouts of exercise boost working memory, speed of information processing, planning as well as decision-making. But they've been less sure how inactivity influences these same cognitive factors.

To fill this research gap, researchers recently conducted a study including a group of up to 228 healthy older adults between 60 and 80. They used physical activity sensors to track participants' daily movements for one week, a tactic they say lends strength to their results. That's because most studies rely on people self-reporting physical activity, a method that can be wildly inaccurate as they tend to overestimate their movement throughout the day.

“On the cognitive level, sitting time may also be meaningful.”

Throughout the study period, scientists put the group through a battery of 16 cognitive tasks. Some tests prompted participants to select patterns, do a fill-in-the-blanks quiz, or identify shapes.

Across the board, participants didn't get much physical activity. On average, most participants spent less than 2.7 percent of their time engaged in moderate-to-vigorous activities.

The latter result suggests sitting isn't always deleterious to brain health — if physical health benchmarks are met, the authors write in a press release. The findings were published in October 2020 in the journal Psychology and Aging.

“There’s this big push within health and wellness that sitting is always bad for your body, that being a couch potato is not good,” study co-author Aga Burzynska says. Burzynska is a professor in the Colorado State University Department of Human Development and Family Studies.

“Although our earlier studies indicated that the brains of those who spend more time sitting may age faster, it seems that on the cognitive level, sitting time may also be meaningful.”

Move it or lose it — More long-term studies are needed to parse the exact mental side effects of sitting. But for now, staring mindlessly at Netflix or gaming online won't likely confer any benefits for the mind.

Instead, reading, going to see a play, or solving a puzzle can support brain health, even when you're sitting down.

Mix in cognitively challenging tasks with lots of physical activity and you're setting yourself up for a healthier 2021 and beyond.

To avoid sinking into a sedentary lifestyle, set a timer once an hour to remind you to move, sports nutritionist David Rogerson advises. Rogerson is a lecturer at Sheffield Hallam University.

Get up, walk away from the laptop, and move your body, he says. This can be as simple as walking up and down the stairs, taking a loop around the block, or simply standing. Standing or treadmill desks can also curb a constant sitting habit.

“The movement needs to be fairly active, and it needs to get you slightly out of breath,” Rogerson told Inverse in April.

"If you take structured movement breaks, what you'll find is that you'll feel better about your work. You might also be more productive, and it's gonna have a 'knock-on effect' in potentially improving your health."

It doesn't necessarily have to be a full-on boxing session or HIIT routine. Extra physical activity could be walking the dog, doing pilates, or playing in the back garden. Aim for about 60 to 75 minutes a day of moderate activity, or 30 to 40 minutes of vigorous activity.