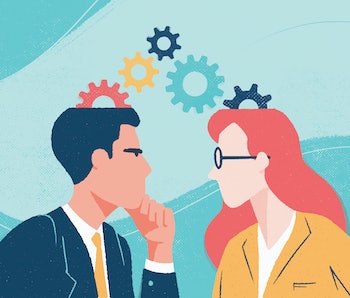 Social scientists have long studied what mix of traits can make up a great leader.

“Emotional intelligence is the ability to acknowledge, understand and then effectively harness your emotions,” Fosslein tells Inverse. “It’s also being able to handle interpersonal relationships well, pick up on other people's emotions, and then move forward.”

These abilities are sometimes called “soft skills,” but they lead to real results. If emotional intelligence isn’t practiced, people can torpedo their work relationships and be tone-deaf in moments of crisis. But if they build EI, people can cultivate loyalty and boost productivity amongst coworkers.

This week, Inverse explores how constructively expressing feelings and managing the emotions of others can propel people’s careers forward.

I’m Ali Pattillo and this is Strategy, a newsletter packed with actionable tips to help you make the most out of your life, career, and finances. If you know someone who might benefit from this, pass Strategy to a friend by using the link at the bottom of this email.

Why are we all so emotion-phobic?

Growing research shows emotional intelligence helps students thrive in school and employees thrive at work. Psychologists John D. Mayer and Peter Salovey originally coined the term “emotional intelligence” in the 1990s. They define the skill as the ability to perceive, reason, understand and manage personal emotions and those of others.

The first hurdle to “leading by feel” is overcoming the misconception that emotions don’t belong at work. This push to check your feelings at the door stems from a centuries-old false dichotomy that rationality and emotions are on two opposite sides of the spectrum, Fosslein says.

Additionally, the workplace was traditionally male dominated (and in some ways, still is). “Men especially have been socialized to not show emotion and that emotions make you hysterical or unreliable,” Fosslein argues.

This pervasive pressure to shut down emotions leads people to constantly suppress and hide what they feel, she says. But inevitably, feelings eventually emerge. “Often, it comes out in really unhealthy ways like yelling, people getting frustrated with each other, and making snippy comments, as opposed to just hashing it out right away, before it's such a big issue.”

The second reason that embracing emotions at work is hard is that people think their emotional bandwidth is built-in.

“If we see a trait as fixed, we don't invest in it,” Fosslein explains. “We just assume, ‘This is who I am.’” With emotional intelligence, this fixed mindset is “really dangerous” because it stunts your growth in all areas of your life.

“Failing to invest in it means you are missing out on super valuable information that can propel your career.”

How to strike a balance

Practicing emotional intelligence means not latching onto an initial emotional response, reading the room, and providing a path forward. Another way to do this is practicing “selective vulnerability,” which is opening up to your team while prioritizing their boundaries, as well as your own. It’s about speaking to emotions without getting emotional, Fosslein says.

When people are scared, upset or angry, they are not productive, and as a leader, your job is to keep them motivated, moving in a certain direction, and provide a sense of calm stability. When your emotions take off like a runaway train, you can get people “riled up” and then everything tanks, Fosslein says.

Instead, take a breath or a walk before responding to a situation. Paying attention to your emotions and reflecting on the root cause can keep you resilient in the face of challenges, and help you temper your feelings.

“There's a lot of research that shows that conflict is inevitable on teams,” Fosslein says. “But if you're able to talk through it constructively, that leads to better problem solving and new ideas.”

Building emotional intelligence can improve life outside the office, too. A 2011 study revealed training emotional competency skills translated to lower cortisol levels, improved mental and physical well being, and even improved personal friendships and romantic relationships outside of work.

At the end of the day, emotions are fundamental to being human, and pretending they can be completely neutralized in the workplace is foolish. Finding ways to be emotionally intelligent and not just emotional, will serve you and your colleagues over the long-haul.

Top five strategies to be considerate of colleagues:

More like this
Mind and Body
6 hours ago
Living near one neglected piece of urban eye candy can greatly boost mental health
By Sarah Sloat
Mind and Body
8.3.2022 11:30 AM
The brain’s memory hub may explain why some people get PTSD and others don’t — study
By Miriam Fauzia
Mind and Body
8.6.2022 8:00 PM
Are fake meats better for the environment? It’s more complex than you think
By Bob Holmes and Knowable Magazine
Related Tags
Share: