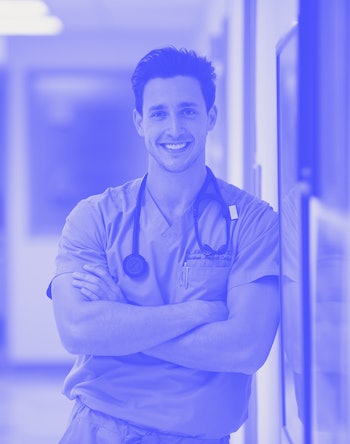 As the family physician and media personality went from "immature" teenager to laser-focused med student to one of the public's most trusted scientific communicators, "Doctor Mike" followed that introspective principle at every turn.

Now, at 30-years-old, Varshavski certainly knows himself and his audience. Long before the Covid-19 pandemic unleashed a flood of conspiracy theories and mixed messages, he spent years fighting misinformation online. In the last five years, he steadily amassed a combined 11 million followers on Instagram, Twitter, and YouTube, by doing something many doctors, with their white coats and intimidating degrees, often fail at — relating to people.

While it's tempting for some to cast-off Vasharvski as a TV doctor with a pretty face, he says whatever it is that initially brings people to his content — his looks, his ability to connect to people, or simply people's desire for knowledge — doesn't really matter. As long as people are learning, laughing, and staying #alertnotanxious, even amid the greatest global health challenge of the century, he's done his job.

In the Inverse original series Rookie Year, leaders in STEM, business, and the arts give us a crash course in early adulthood, breaking down the triumphs, stumbles, and lessons learned from their first year in the working world.

What was your very first job and what did it teach you?

My first job was actually in politics of all things. I worked for the then-Attorney General of New York, Eliot Spitzer. I was on his campaign to become the governor of New York, which actually ended up being a successful campaign. Afterward, there was a lot of drama.

It was a paid internship and I was definitely the youngest person by far — 13 or 14-years-old. I learned a lot working there, not only about how the world works but about professionalism, how to carry yourself, what it means to be a good employee; how to present yourself to individuals who are in the press. I think it served as a good foundation for me, even though it has nothing to do with what I practice or do now.

What was a job that made you realize you were pursuing a career you loved?

When you're 13, what do you really know? If we're being honest, I was a young and immature 13-year-old who was just excited to go home and play video games or sports. I wasn't thinking that far into the future.

I want to tell people that that's okay. If you're not sure what to do when you're 13,14, 15-years-old, it's not the end of the world. Just develop good habits that you can then apply to whatever you become passionate about. The fact that I didn't have that goal set for myself at that point is perfectly acceptable.

In my high school years, I started working in a healthcare office that allowed me to do a tech position. It was administering tests, asking patients questions about their history, helping them fill out forms, and I loved that one-on-one interaction with a patient. So while I was always curious about the surgical fields of medicine — because that's what you see on TV and that's what's glamorized — I really fell in love with actually talking and communicating with folks; telling them about certain things that they thought were happening with their health when it wasn't actually a true diagnosis, or pointing them in the right direction when they were taking some kind of miracle cure-all supplement that didn't do anything.

That was my "lightbulb moment" where I said, I really need to be one on one with patients. That's what I really enjoy.

In the montage of your first year on the job, what would be the song that plays in the background?

It would be the 'Rocky' theme song: "Eye of the Tiger." Because I was focused. I was ready. I remember my friends would take their summers off and go hang out and play basketball all the time. And I did that on weekends or the days that I had off. But then I would be taking that express bus from Staten Island into Manhattan to go to the politics job. I would be taking my Sundays during my school year to go work at that medical office.

Can you describe an early career mistake and what you learned?

God, am I really gonna be that person that's like I've never screwed up? I'm sure I've screwed up many times but nothing dramatic sticks out to me. I've really played very carefully in terms of my mistakes. I try to avoid large mistakes in my life and allow myself to make a lot of small mistakes. Because small mistakes you can learn from and you can live with while you're experimenting and you are trialing things out.

"You need to lean into that uncertainty and uncomfortable feeling of sometimes needing to pivot."

Along the way, I've probably taken on too much. I've definitely lost some moments and some of my youth and [missed] experiencing some things that my colleagues and friends probably did get to experience. To me, it was a trade-off about wanting to get to where I am now as fast as humanly possible.

I became a doctor really young — at age 24 — because I did all these accelerated programs. I worked during my summers, so I didn't travel as often as my friends did. I'm hoping to catch up. I probably could have just given myself a little bit more patience and could have been a little nicer to myself in that process.

What happens if you realize the career path you’re on isn’t what you want?

Step one: I think you have to really have to know yourself. I actually have a single tattoo on my body and it's "know thyself" in Latin.

I think before you do anything in life, whether it's choosing a career, a partner, even what your furniture looks like at home, you have to know yourself and understand why you're doing these things. And they don't have to be the right answers. They just have to make sense of who you are at that given moment.

Who you are is a fluid concept. Things change and you learn about yourself as time goes on. You need to lean into that uncertainty and uncomfortable feeling of sometimes needing to pivot and understand the fact that sometimes you need to pivot because of things outside of your control.

Understand that it is the norm for things to change, and try to get yourself in a position where your best asset is your ability to change and be adaptable and pivot. I think that will ease some of that anxiety and tension that comes along with the process.

What was a moment in your early career that forced you to innovate or pivot?

Attire was definitely the first thing because being someone who grew up in Brooklyn and went to inner-city schools my whole life, I dressed in a very '90s style — loose clothing, ECHO, South Pole, baggy shorts hanging off my hips.

On my first casual Friday, people came in slacks — I came in dressed like that, and I realized how inappropriate and weird it was. At the same time, it also served to me that lesson that you shouldn't ever judge a book by its cover. Because while wearing those clothes, I was accomplished from a young age, I did my work very well and thoroughly.

Do you think it’s important to have a mentor? If so, how did you get one and what guidance did they provide?

I had my father as an example, as a disciplinarian. Did he know anything about social media or anything? Nope. Did I have someone to lean on for media advice? Nope. I feel like I'm a trailblazer when it comes to young folks getting on social media and doing it responsibly with medicine. I feel like we [his team] were the first to do that — and that's why we're growing. I don't think it's because I'm the most talented, I just happen to be there at the right time and saw that opportunity.

I think reaching out to mentors is really important. There's a lot of valuable knowledge that comes from experiences. Part of being a good doctor, communicator, and social media influencer is knowledge but also that experience. You can't put a price on that.

People used to ask, "Mike, why are you becoming a family medicine doctor? You should become a plastic surgeon, a dermatologist, an emergency room physician." The reason I was given this advice is not that they knew me so well and knew I would thrive in those fields. It was either for superficial reasons: "Oh, you look like an orthopedic surgeon," or look at the financial rewards. Look at the lifestyle that you can have being this doctor.

"What you get paid, especially as a physician, does not determine your happiness level."

Family medicine traditionally is one of the lower-paid specialties. But that's a boundary that we set for ourselves. It's also a bar that we use for success that is inaccurate.

What you get paid, especially as a physician, does not determine your happiness level. If you're doing a job you don't like and you're not getting paid a lot of money for it, that's gonna be tough. But if you're doing a job you love and you're getting compensated fairly within that job, you're gonna love it — it doesn't matter that you're getting paid less.

The more passion you have for the given field, the more likely it is that you're going to go way above whatever it is that field traditionally earns. So those people who told me to chase the superficial, extrinsic layers of happiness, which include status, money, fame, were the ones that were misguiding me the most. And luckily, because I didn't focus on those things, I got all of them.

There's a saying that my father would tell me often in Russian: "Через не могу." It means "going through, I can" — essentially the Russian version of Nike's 'Just do it.'

My dad would tell me that all the time, whether it was in my Taekwondo training early on, or the fact that I was exhausted after a long day of school. I would repeat it to myself as I got older when I was working a 24-hour shift as a resident in the hospital or I was on the seventh or eighth day of work in a row and was just mentally drained.

It's saying you have to sometimes push through and once you do, you realize how much better it feels. It means, for a short period of time, it's okay to feel uncomfortable.

And in fact, short acute stress is good for you. It helps your mind grow, it helps your bones stay strong. In fact, it's what causes your muscles to grow when you go to the gym. So as much as we want to decrease all of this negative stuff in society, we also shouldn't be completely afraid of some negative things along the way because it's important to our mental physical and spiritual growth.

The interview above has been edited for clarity and brevity.